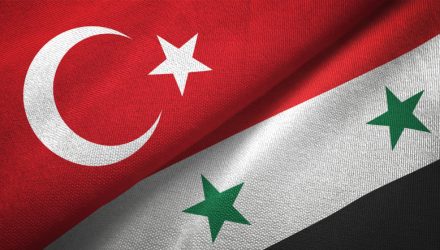 The Turkey country-specific ETF was among the worst hit Friday on growing fears of an increasingly bellicose neighbor after a U.S. airstrike killed a top Iranian commander.

Turkish stocks retreated and state-run banks even had to step in to support the weakening lira currency after a United States airstrike killed Major General Qassem Soleimani in Iraq, AhvalNews reports.

Turkey was particularly susceptible to volatile moves on Friday as the country is a neighbor of Iran and has close political ties to Middle Eastern country, especially as the two countries alongside Russia try to find a solution to the ongoing civil war in Syria.

The sudden airstrike now threatens an escalation in regional tensions, and it came when Turkey’s economy is a particularly fragile state after picking up from a currency crisis in 2018.

Turkey’s Foreign Ministry has experienced concern that Soleimani’s death will likely heighten tensions between the United States and Iran, and it could even turn Iraq, another Turkish neighbor, into a battle ground that would further embroil the region in conflicts.

“Turkey is gravely concerned over escalating tensions in the region between the U.S. and Iran,” the Foreign Ministry said in a statement. “It is obvious that the U.S. airstrike targeting the convoy of Gen. Qasem Soleimani, the commander of the Iranian Revolutionary Guards Corps’ Quds Force, and the people along with him in Baghdad early on Friday will escalate mistrust and instability in the region.”

The sudden uncertainty and its effect on the Turkish lira pushed state lenders to sell between $1 billion and $1.5 billion to support the local currency, following a global flight from riskier assets, Bloomberg reports.

State banks have previously sold U.S. dollars to strengthen the lira over the past year, especially during periods of volatility, as the currency is seen as a key economic barometer for voters and a driver of consumer confidence.