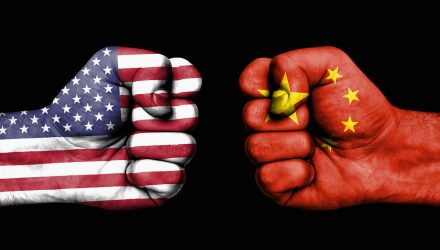 Stocks careened lower again Monday as trade tensions between the U.S. and China appear no closer to cooling off than they did earlier this month. The trade flap between the world’s two largest economies is taking its toll on US-listed China exchange traded funds.

For example, the iShares China Large-Cap ETF (NYSEArca: FXI), one of the largest China ETFs trading in the U.S., closed 3.26 percent on Monday. That after FXI notched its worst weekly performance in over a year last week.

FXI “rocketed higher to start 2019, and just last month was bumping up against the formerly supportive $46 area,” according to Schaeffer’s Investment Research. “Now, shares of the fund are pacing for a second straight close beneath their 200-day moving average, and are testing the waters around $41 — a 61.8% Fibonacci retracement of the aforementioned January-to-April rally. For the week, FXI has surrendered more than 7%, set for its steepest weekly drop in more than a year.”

With Monday’s loss, FXI is on the cusp of bear market territory and sporting a double-digit loss since the start of May. The China ETF is also residing below its 50- and 200-day moving averages. Entering Monday, FXI was more than 17% below its 52-week high. Bearish options traders are taking note FXI’s weakness.

“A healthy portion of the puts traded on the ask side, pointing to freshly bought bearish positions,” reports Schaeffer’s. “The out-of-the-money May 39.50 put was also popular, with nearly 60,000 contracts added to open interest in the past week. Now, total put open interest among all series stands at more than 2.22 million contracts — the highest point in at least a year.”

In the current quarter, investors have pulled $53.18 million from FXI.