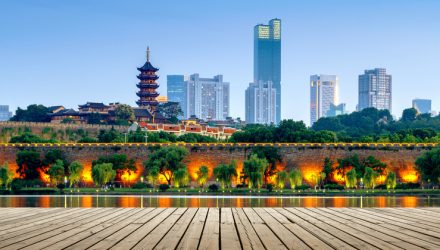 This China Sector ETF Started 2020 on a Strong Note

The Global X MSCI China Financials ETF (NYSEARCA: CHIX) was a decent though not spectacular performer last year. Just one day into 2020, the Global X sector fund is making a case for the spectacular category.

CHIX follows the MSCI China Financials 10/50 Index. That index provides exposure to large- and mid-cap Chinese financial services firms. The CHIX index “incorporates all eligible securities as per MSCI’s Global Investable Market Index Methodology, including China A, B, and H shares, Red chips, P chips, and foreign listings, among others,” according to Global X.

CHIX surged 3% on Thursday thanks to some help from the People’s Bank of China (PBOC), that country’s central bank.

PBOC “said on Wednesday it was cutting the amount of cash that all banks must hold as reserves, releasing around 800 billion yuan ($114.91 billion) in funds to shore up the slowing economy,” reports Reuters.

Beijing has had to respond to changing global conditions with increased central bank policies. As trade barriers go up, authorities can no longer rely on foreign investment or exports that have previously supported the country’s growth for so long. Consequently, policymakers believe it is more efficient to focus on a domestically-oriented economy.

With CHIX, investors can access financial services sector growth at a discount relative to equivalent domestic ETFs. Due to previous fears about instability in the Chinese banking system, many of which have yet to materialize, banks in the world’s second-largest economy trade at depressed valuations relative to their U.S. counterparts.

“Freeing up more liquidity now would also reduce the risks of a credit crunch ahead of the long Lunar New Year holidays later this month when demand for cash surges. Record debt defaults and problems at some smaller banks have already added to strains on China’s financial system,” according to Reuters.