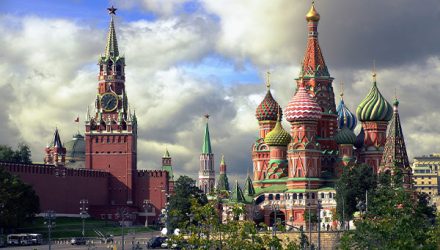 Russian stocks, as measured by the MOEX Russia Index, turned positive for the year on Tuesday of this week after plunging 30 percent due to the pandemic. This puts them slightly behind the S&P 500, but did you know that, despite the drama surrounding the annexation of Crimea and volatile oil prices, stocks trading on the Moscow Exchange have beaten U.S. equities for the five-year period? Even when priced in U.S. dollars, the MOEX is up 100 percent, compared to the S&P, up 74 percent as of August 4.

This resilience helps support the idea of wisdom of crowds and the power of contrarian thinking. Think of all the bad press Russian stocks have had to overcome during the past few years, from international sanctions to U.S. election meddling. The MOEX slipped to a four-year low in March 2014 after the U.S. slapped Russia with fresh sanctions for violating Ukrainian sovereignty, after which it followed a mostly upward trajectory until the pandemic put the brakes on the rally.

As former President Bill Clinton once said, “Follow the trendline, not the headline.”

I’m reminded me of a Harvard Business School case study on U.S. health care stocks, which rallied in the early 2010s despite all the negative press and attack ads aimed at Obamacare following its passage in March 2010. According to one estimate, between 2010 and April 2014, the amount of money spent on negative Obamacare TV ads was 15 times greater than positive Obamacare ads—$418 million versus $27 million. Despite this, health care stocks more than doubled over the next five years, while Louisville-based Humana increased a whopping 370 percent.

Good investors know how to spot the opportunities, even when (especially when?) the headlines are telling them there are none. Those who snub Russian stocks for that very reason could be leaving money on the table.

From a macro point of view, there’s a lot to like about Russian stocks. One of the most attractive features is how undervalued they are relative to stocks in other regions. As of this month, the MOEX was trading at only 8.6 times earnings. That’s more than half as cheap as emerging markets, three times cheaper than the S&P 500, and 3.5 times cheaper than European stocks.

The deal is sweetened with a dividend yield that few other regions can match. As of August 4, Russian stocks were yielding an incredible 6.4 percent, while the MSCI World Index was offering 2.2 percent, the S&P 1.8 percent.

But it’s not just the yield that matters, of course. It’s also important to look at dividend growth, and in that respect, we especially like Lukoil, the giant oil and gas explorer/producer. Responsible for producing some 2 percent of the world’s oil and trading at 7.58 times earnings, Lukoil has a very attractive trailing 12-month (TTM) dividend yield of 10.56 percent. For the past 20 years, the company has consistently been increasing its dividends per share. Growth was an incredible 116.8 percent for the one-year period.

Sberbank is another low valuation/high dividend play. Trading at 6.65 times earnings, the commercial bank currently has a TTM yield of 8.37 percent.

Yandex, the Exception to the Rule

A Russian name we like, despite it not paying a dividend, is internet search firm Yandex, Russia’s answer to not just Google but also Amazon, Uber, and Grubhub. Since the market bottomed in mid-March, Yandex shares in USD have blasted past 100 percent, outperforming the Nasdaq 100, up 55 percent.

Yandex shows a lot of growth potential after reporting last week. The company highlighted strong revenue from search advertising and ride-hailing in July, the latter rising 25 percent compared to the same month a year earlier. Orders for Yandex.Eats, a food delivery service launched in 2018, doubled year-over-year in the second quarter.

Like Amazon and other U.S. internet firms, Yandex is a member of one of the few industries to benefit from sheltering-in-place. In a research note dated July 28, JPMorgan rated the company Overweight, seeing it as “an attractive exposure to the rapidly evolving Russian online taxi, food takeaway and e-grocery market.”

A Vaccine by October?

On a final note, I’d like to address some of the obvious concerns investors might have about Russia and Russian equities. Like the U.S., Russia’s COVID-19 infection rate is one of the worst in the world, with the number of daily new cases and deaths seeing little slowdown. As a result, its economy has taken a sizeable hit. The country’s finance minister estimates that GDP contracted 4.2 percent in the first half of the year, and growth is projected to clock in at negative 4.8 percent for the full calendar year.

To address the pullback, the Bank of Russia has been steadily lowering its key interest rate. In late July, the rate was trimmed for the fourth time this year and is now at a post-Soviet low of 4.25 percent. The central bank’s president, Elvira Nabiullina, has indicated that additional cuts may be forthcoming in 2020.

Not only will this lower borrowing costs, obviously, but it should also make savings accounts less attractive to Russian citizens. I think it’s reasonable to expect a large percentage of this money to flow into the Russian stock market instead, which should support share prices.

You can file this next point under “longshot,” but it’s worth having on your radar. As you may have heard, Russia seeks to become the first country to administer a coronavirus vaccine on a nationwide scale. We now know that the vaccine’s rollout is being scheduled for October, according to a number of reports, with teachers and health care workers the first to receive it.

Again, it’s a longshot—the international medical community has expressed doubts about the vaccine’s efficacy—but should it succeed, Russian stocks could be first to see a huge spike.

Be first to know when we post a new YouTube video by subscribing to our channel! By clicking here, you will be taken to the U.S. Global Investors YouTube channel. Hit “Subscribe” in the upper right corner. We truly appreciate your support—happy investing!

The price-earnings ratio, also known as the P/E ratio, or P/E, is the ratio of a company’s share price to the company’s earnings per share. The ratio is used for valuing companies and to find out whether they are overvalued or undervalued. The dividend yield is a financial ratio that shows how much a company pays out in dividends each year relative to its stock price. There is no guarantee that the issuers of any securities will declare dividends in the future or that, if declared, will remain at current levels or increase over time.

The MOEX Russia Index is a cap-weighted composite index calculated based on prices of the most liquid Russian stocks of the largest and dynamically developing Russian issuers presented on the Moscow Exchange. The S&P 500 is widely regarded as the best single gauge of large-cap U.S. equities and serves as the foundation for a wide range of investment products. The index includes 500 leading companies and captures approximately 80% coverage of available market capitalization. The S&P 500 Health Care Index is a capitalization-weighted index. The MSCI Emerging Markets Index is a free-float weighted equity index that captures large and mid-cap representation across Emerging Markets (EM) countries. The index covers approximately 85% of the free float-adjusted market capitalization in each country. The STOXX Europe 600 Index is derived from the STOXX Europe Total Market Index (TMI) and is a subset of the STOXX Global 1800 Index. With a fixed number of 600 components, the STOXX Europe 600 Index represents large, mid and small-capitalization companies across 17 countries of the European region. The MSCI World Index is a free-float weighted equity index that includes developed world markets. The NASDAQ-100 Index is a modified capitalization-weighted index of the 100 largest and most active non-financial domestic and international issues listed on the NASDAQ.

Holdings may change daily. Holdings are reported as of the most recent quarter-end. The following securities mentioned in the article were held by one or more accounts managed by U.S. Global Investors as of 6/30/2020: Lukoil PJSC, Sberbank of Russia PJSC, Yandex NV, Amazon.com Inc.