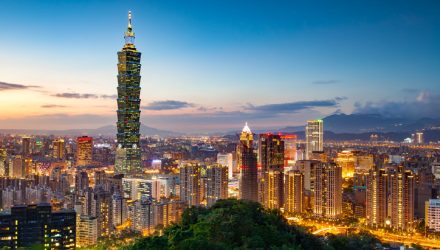 Taiwan country-specific ETFs popped off on Monday after a landslide victory for President Tsai Ing-wen over the weekend.

Investors reacted positively to the victory of Tsai’s Democratic Progressive Party, which has pushed for Taiwan’s formal independence from mainland China, Bloomberg reports.

Foreign investors also jumped on the momentum, acquiring a net NT$10.7 billion, or $359 million, of local stocks on Monday, the most in almost a month.

Taiwan’s markets could extend their rally if past moves after an election are any indication. The benchmark Taiex index has returned an average of 7.4% in the 30 days following the results of the previous six presidential elections in response to fading political risks. Furthermore, the planned signing of an initial trade accord between China and the U.S. is also expected to further diminish global trade fears and add to Taiwan’s momentum.

“Taiwan stocks tend to rise after an election, as uncertainty is removed,” Li Fang-kuo, chairman of President Capital Management, told Bloomberg, pointing to a strong outlook for Taiwan’s technology sector.

Furthermore, the government has taken efforts to lure capital and incentivize local firms to invest at home as a way to limit the negative effects of the U.S.-China trade war. Consequently, the actions have helped encourage strong foreign inflows into the island’s technology sector, strengthening the Taiwan dollar.