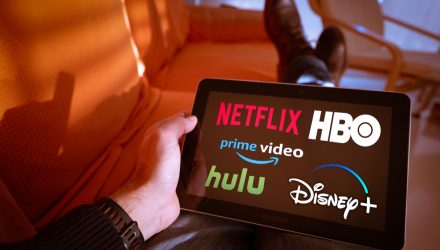 The Communication Services Select Sector SPDR Fund (XLC) is getting some fanfare as a coronavirus play due to its exposure to companies, namely Facebook and Alphabet, that are involved in the virtual meeting space, the largest communication services ETF has other viable stay-at-home credentials.

While Facebook and Alphabet are the dominant names in XLC, combining for over 40% of the ETF’s roster, Disney and Netflix add to the fund’s possibilities as a coronavirus stay-at home-idea.

“Lockdowns may have got us spending more time in front of the television but it won’t help the ailing physical video market. Instead, consumers are switching even faster to streaming sites, with Netflix, and Disney+ among those that are attracting subscribers at a rapid rate,” said GlobalData in a note out Monday.

Thanks to the likes of Netflix, Amazon.com Inc. (NASDAQ: AMZN), Roku (NYSE: ROKU) and others, the streaming space is becoming increasingly competitive and that competition spotlights the utility of a fund such as XLC, which helps investors avoid stock picking on their own.

“Streaming has been a significant disruptor in the video market, with the likes of Netflix and Amazon Prime enticing consumers to invest in their services at the detriment of physical DVD and Blu-ray sales,” said GlobalData analyst Zoe Mills. “The COVID-19 pandemic is set to exasperate this market even further as not only is there a major new entrant to streaming but also with more people spending time at home, investment in these subscription services appears more worthwhile as consumers are able to use them more regularly.”

Both Netflix and Disney, the latter of which is also a rising streaming player due to Disney +, are the top 10 holdings in XLC.

“Following its initial US launch in November 2019, Disney + became available in several European countries in March 2020 just as many of these countries entered lockdowns.  It reached its global target of 50 million global subscribers five months after its US launch – an achievement that took Netflix seven years to accomplish,” according to GlobalData.