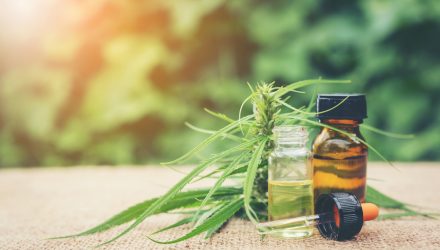 Nearly left for dead, cannabis ETFs are on the in the mend. For example, the Global X Cannabis ETF (NASDAQ: POTX) is higher by 48% in the second quarter and there could be more upside to be had for this and other cannabis ETFs.

In previous years, state-level legalization news often left cannabis investors yearning for more upside as those headlines often did little to stir marijuana ETFs, but this time around could be different given the sheer amount of states that could turn to legal recreational cannabis as an avenue for bolstering state coffers depleted in the wake of COVID-19.

“Canaccord Genuity analyst Bobby Burleson in December pointed to 16 states that he expected to put pot legalization on their ballots this election year. That list has since dwindled as Covid-19 has dominated officials’ attention, slowing down ballot initiatives across the nation” reports Connor Smith for Barron’s.

Younger demographics are often viewed as the primary consumers of marijuana and important drivers for the long-term cannabis investment thesis. With 2020 being an election year, there could be some political factors at play that could lead to the upside for POTX later this year.

“Burleson thinks such a slowdown may be temporary. He points to budget shortfalls in states forced to shut down, especially ones that have been weighing legalization already, as motivation to legalize cannabis for tax revenue,” according to Barron’s. “He cites a study of 38 states from the Center on Budget & Policy Priorities, which forecasts an aggregate state budget shortfall of 10% in the fiscal year that ends on June 30. Of the 27 where the projected tax revenue shortfall is expected to be 10% or more, nine have discussed cannabis reforms in 2020.”

A slew of new markets, including health and wellness, oil extracts, tinctures, topicals, and capsules, are opening up for cannabis producers. Plus, some POTX components are poised to benefit from increased marijuana consumption – medicinal and recreational – thanks to coronavirus shelter in place directives.