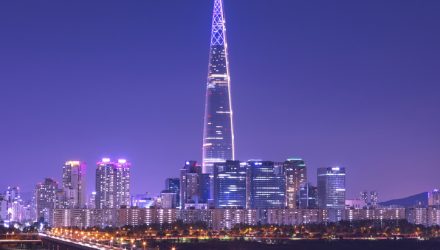 South Korea ETF Could be Ready to Bounce Back

South Korea, Asia’s fourth-largest economy, is grappling with trade tensions of its own, namely with Japan. As a result, the usually docile iShares MSCI South Korea Capped ETF (NYSEArca: EWY) is lower by more than 8.6% year-to-date.

“South Korea is confronting new external problems and old domestic bottlenecks,” reports Craig Mellow for Barron’s. “Count among the new issues tensions with its two critical trading partners, China and Japan. Beijing has orchestrated a soft boycott of Korean exports, even K-Pop bands, since Seoul agreed to buy a U.S. antimissile system in 2017.”

The $4.10 billion EWY tracks the MSCI Korea 25/50 Index and holds 115 stocks. Technology is by far the ETF’s largest sector weight at nearly 35% and there is some individual securities risk in the fund as EWY devotes 24.50% of its weight to Samsung.

Furthermore, some Asian economies could capitalize on a redeployment of investment capital from wary companies that are operating in China but are looking to diversify away from the trade uncertainty

“Internally, Korea continues to struggle with reliance on its chaebol—sprawling family-controlled conglomerates (including Samsung and SK Hynix), that remain resistant to improving shareholder value,” according to Barron’s.

SK Hynix is EWY’s second-largest holding at a weight of 5.74%. South Korea’s rift with Japan could end up benefiting Korean companies over the long-term, if they embrace necessary self evaluation.

“Tokyo’s threats could also push South Korea to see that the world it thrived in—one of integrating supply chains and export-led growth based on national industrial champions—is fading,” according to Barron’s.