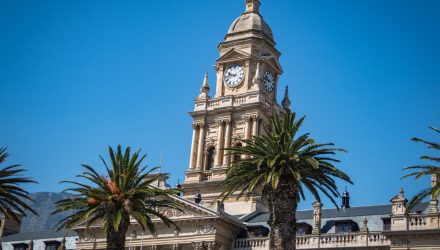 The iShares MSCI South Africa ETF (NYSEArca: EZA), the largest exchange traded fund dedicated to Africa’s largest economy, rallied in advance of national elections there, but with some of the marquee results from Wednesday’s polls looking like certainties, EZA slumped on Thursday.

In midday trading Thursday, EZA was trading lower by nearly 3%, trimming its year-to-date gain to 10.37%. The African National Congress will tally votes in the May 8 poll where many expect President Cyril Ramaphosa will strengthen his position, providing the current administration the ability to carry out investor-friendly changes.

“Two results can be safely predicted: Cyril Ramaphosa will win a full five-year term as president after his African National Congress receives a majority, and he will face daunting challenges cleaning up the mess left by predecessor Jacob Zuma and returning the country of 58 million to stable growth,” reports Craig Mellow for Barron’s.

South Africa’s economic weakness raises the country’s risk profile in a time when emerging market assets are under pressure from a strong U.S. dollar and escalating global trade tensions. Furthermore, some observers are concerned it may increase the chances of a credit downgrade.

“Juicing economic growth above its current 1%, and cutting unemployment from about 25%, requires more foreign investment in South Africa’s rich mines,” according to Barron’s. “But that means cutting taxes and dialing back commitments to so-called black economic empowerment, neither a popular measure with the ANC base.”

The $500 million EZA follows the MSCI South Africa 25/50 Index and holds 50 stocks. Financial services names account for nearly a third of EZA’s weight while the materials and consumer discretionary sectors combine for almost 41%.

“South African securities have actually done well lately. Stocks are outperforming global emerging markets year-to-date with a 10% gain in the iShares MSCI South Africa exchange-traded fund (ticker: EZA). Bond yields have compressed half a percentage point from a peak in November,” according to Barron’s.

South Africa is the sixth-largest country weight in the MSCI Emerging Markets Index.