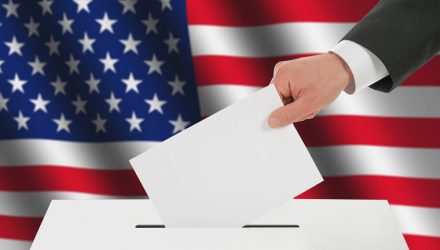 Pick and Choose Your Sector ETF Exposures During an Election Year

In an election year, some market segments and sector-related ETFs may perform poorly while others stand out as investors react to policy momentum among the presidential candidates.

The S&P 500 healthcare and technology sectors have historically been the worst performers of the four-year election cycle during the years Americans go to the polls to elect their president, the Wall Street Journal reports.

The healthcare sector is especially under the spotlight this time around as Democratic candidates propose major changes to how Americans receive health insurance and President Donald Trump eyed drug prices.

On the other hand, the financial sector led the charge during election years, showing an average return of 21.6%. This could bode well for the Financial Select Sector SPDR (NYSEArca: XLF), the largest financial services ETF, which has been largely underperforming. The financial sector has often been categorized as a value pick, and some market observers are already considering the switch over to value stocks after growth stocks led market gains.

Jamie Cox, managing partner for Harris Financial Group, argued that investors can still capture returns in the election year this time around as a steady economy, progress on trade and earnings growth could continue to support the outlook.

“That should clear the decks for markets to do quite well throughout this year,” Cox told the WSJ.