You are at:Home»Thematic Investing Channel»The Nuclear Option: An ETF Powered by Uranium 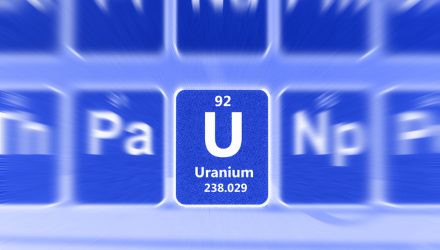 The Nuclear Option: An ETF Powered by Uranium

Silver and gold aren’t the only metal plays on the block. As U.S. purchases for uranium ticked higher in 2020, one asset to watch is the Global X Uranium ETF (URA).

The use of uranium can be a contentious topic due to its use in the creation of nuclear power. As such, it can also be used to create nuclear weapons.

“Uranium (U) is a metallic, silver-gray element that is a member of the actinide series,” a New Mexico Bureau of Geology and Mineral Resources article explained. “It is the principle fuel for nuclear reactors, but it also used in the manufacture of nuclear weapons.”

However, as the push for cleaner energy sources starts to ramp up, nuclear power generation could play a vital role. Purchases of uranium ticked higher in the U.S. during 2020, despite a pandemic-ridden year.

URA seeks to provide investment results that correspond generally to the price and yield performance, before fees and expenses, of the Solactive Global Uranium & Nuclear Components Total Return Index. The fund invests at least 80% of its total assets in the securities of the underlying index and in American Depositary Receipts (ADRs) and Global Depositary Receipts (GDRs) based on the securities in the underlying index.

When placed side by with with a popular gold-based fund, URA is showing its strength. The fund is up 43% on the year and almost 100% the past 12 months.

As mentioned, nuclear power could be of importance in the push toward clean energy initiatives. The federal government is already working to create tax credits for nuclear power production.

“Three Senators have proposed an amendment to tax credits to boost the competitiveness of nuclear power, Reuters reports, adding that the proposal is part of a wider energy reform bill that was voted on yesterday in the Senate,” an OilPrice.com article said.