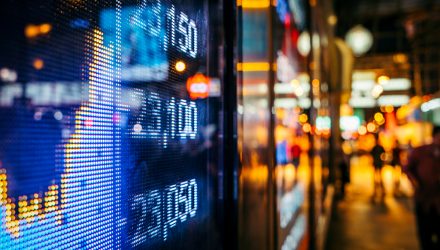 However, some analysts are saying it might be time to revisit related sector ETFs, including the Financial Select Sector SPDR (NYSEArca: XLF).

The financial sector has been among this year’s worst performers, with bank stocks underperforming the S&P 500 by close to 30% year-to-date, as many observers grew concerned over the austerity measures put in place for loan-loss provisions to hedge against a prolonged recession, along with constricted profitability in the short-term due to a record low interest-rate environment.

Still, some analysts see opportunity brewing in XLF. For example, AltaVista Research has an “overweight” rating on XLF. That’s the highest rating the research firm places on ETFs.

“Above average appreciation potential. A rating of OVERWEIGHT is assigned to ETFs with ALTAR Scores in the 4th quintile (ranking higher than 60%-80%) of their category. Typically, funds in this category consist of stocks trading at attractive valuations and/or having above-average fundamentals,” according to the research firm.

Banks depend on consumers’ ability to go out and spend money, along with paying off bills. The stronger consumer confidence may also reflect Americans are in better shape than many previously believed, and a rebound may be closer in sight. Consequently, as states begin to reopen economies and consumers step outside again, the loan losses for banks may be lower feared.

With the Federal Reserve having pared interest rates to near zero, concerns are mounting about banks’ net interest margins and whether those depressed margins could affect shareholder rewards, including buybacks and dividends.

Lenders typically make their money off the difference between long-term loans and deposits, underscoring investors’ apprehension about the industry right now.

“Though current business conditions are far from ideal the forecast decline in profitability this year is much less severe than during the Financial Crisis,” according to AltaVista. “Once this is past we think Financials can return to the ~11% ROE achieved in 2018-19. Meanwhile, the P/BV multiple remains depressed resulting in an Overweight recommendation under our rating framework. However, sell-side analysts disagree and rank Financials poorly, though sentiment has been improving.”