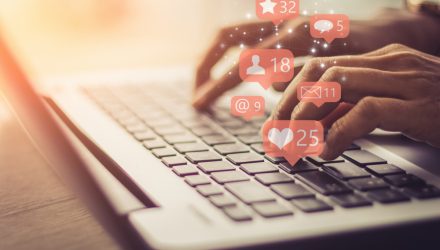 SOCL, the original ETF dedicated to social media equities, is higher by 10.40% over the past month and nearly 59% since the start of the second quarter. It’s run may not be done as some market observers believe social media names can build on recent gains despite being ensconced in political controversy.

“Civil-rights groups, U.S. lawmakers, and the Justice Department targeted large-cap social media companies such as Facebook and Twitter Wednesday, for a group of unrelated concerns related to how the companies deal with user-generated content on their platforms,” reports Max Cherney for Barron’s.

This isn’t the social media industry’s first bout with political pressure. Over the past several years, one side of the aisle complains the industry allows offensive speech while the other asserts the likes of Twiter, Google, and Facebook intentionally favor one political view over another. Now some senators are taking action.

“The legislative approach comes from Republican Sen. Josh Hawley, an outspoken critic of big technology companies. He introduced a bill Wednesday to limit the protections such companies enjoy under an arcane section of the 1996 Communications Decency Act,” according to Barron’s. “The provision, known as Section 230, has had an outsize impact on how the internet has been shaped because it grants sweeping liability protections to sites with user-generated content.”

What’s crucial for investors is if all the political conjecture hits online ad revenue, a major moneymaker for social media firms.

“Investors are likely also watching online advertising closely, given that the market was hurt in the early days of the Covid-19 pandemic,” according to Barron’s. “But revenue growth has been steadily improving—especially at Snap and Facebook—aided by new technologies and the siphoning off of television ad dollars, according to a Wednesday note from J.P. Morgan analyst Doug Anmuth.”