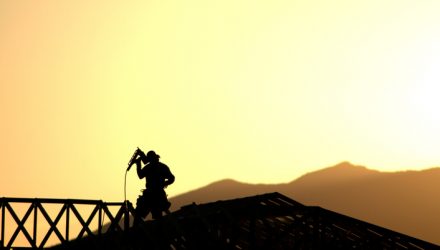 Up 40.56% year-to-date, the SPDR S&P Homebuilders ETF (NYSEArca: XHB) is among 2019’s best-performing non-leveraged ETFs, but investors should not assume that XHB’s bullishness is exhausted.

Backed by some encouraging data points, XHB and rival homebuilders ETFs could notch more upside through the latter stages of the fourth quarter.

Last week, the Commerce Department revealed construction spending was 0.5% higher over September, compared to expectations of a 0.2% gain, Reuters reports. However, data for August was downwardly revised to show construction outlays slipping 0.3% instead of rising 0.1% as previously calculated.

Other Catalysts To Consider

Declining mortgage rates and robust employment also add to the case for XHB.

Mortgage rates have been on a steady decline after the Federal Reserve cut interest rates three times this year in support of perceived weakness in the economy. The current economic expansion, now in its 11th year, is still exposed to a trade war between the United States and China, along with slowing growth.

Further bolstering the risk-on sentiment, the Labor Department reported a better-than-expected payroll number. The improved economic status helped fuel expectations that Americans may be better off and could continue to buy into an expanding housing market.

“The total of new and existing home sales has rebounded from the bottom since January and exceeded the previous peak in June 2017,” according to State Street. “Homebuilder sentiment, as measured by the NAHB/Wells Fargo Housing Market Index, picked up for the sixth straight month. These positive industry trends helped homebuilders deliver upbeat earnings results in Q2 and drove positive estimate revisions for 2019 and 2020.”

A strong labor market is pivotal to XHB’s fortunes and data confirm as much. Plus, XHB is not expensive on valuation despite its stellar 2019 performance.

“A strong labor market, rising wages, and favorable demographic changes are likely to continue supporting housing demand and homebuilders’ earnings growth. The homebuilders’ comeback may still have legs, as the industry is trading within the bottom quartile over the past 10 years based on trailing and forward price-to-earnings,” notes State Street.