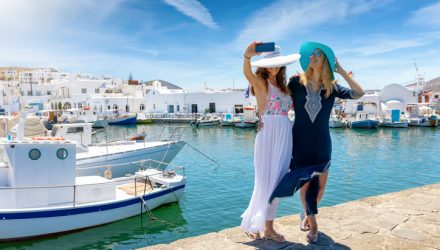 GREK has the potential to deliver more near-term upside. As been previously noted, an improving political environment has been a boon to GREK and Greek financial markets.

“While Europe’s equity benchmark is set to record its best annual gain since 2009, it’s been left in the dust by the top stock market worldwide: Greece. The country’s shares have climbed 45% this year, rising from a low base after a decade of crises. As Greek stocks get out of the doldrums, fund managers may start looking at the market again,” according to Bloomberg.

Get on the GREK Train

“You have to go back to the time before the euro replaced the drachma to find higher returns in the Greek equity market, and there are reasons to be optimistic about the coming year, particularly if the economy continues to improve,” reports Bloomberg

Indeed, recent political change has bolstered the case for GREK and Greek equities.

“Momentum for Greece accelerated after the summer election, according to George Lagarias, chief economist at Mazars Financial Planning, as the new government showed its willingness to implement a package of tax cuts and pro-business policies. That has reduced some of the discount that Greek risk assets were trading at, he says,” reports Bloomberg.

Te Greek economy has consistently been improving over the past couple of years and the country recently, to the surprise of some market observers, issued negative-yielding debt, meaning investors are paying for the privilege of owning those sovereign bonds. Importantly, signs continue emerging that Greek banks are firming.