You are at:Home»Thematic Investing Channel»Good Greece: This ETF is Up 40% Year-to-Date 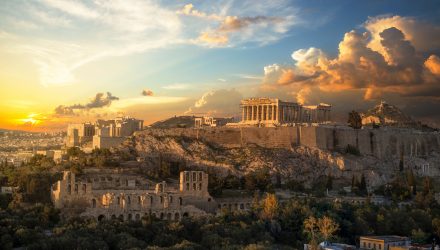 Good Greece: This ETF is Up 40% Year-to-Date

It didn’t seem that long ago when Greece was in a world of hurt and threatened to drag down the rest of the Eurozone with it, but the country is starting to get its financial house in order and as such, its progress is reflecting in the Global X MSCI Greece ETF (NYSEArca: GREK), which is up 40% based on Yahoo Finance.

Even though there’s still a lot of work to do, Greece still has the highest debt load and unemployment rate in the Eurozone. Nonetheless, more investments and tax cuts could help propel growth for Greece in 2020.

Furthermore, its government is projecting that the country will achieve a budget surplus of 3.5% of GDP through the year 2022. Those numbers are also backed by Eurozone lenders supporting Greece with expectations of a 2.2% GDP growth next year.

“Lowering any overperformance (on the primary surplus) is a first step in our effort to reduce the targets themselves, a condition for the acceleration of economic growth,” the draft budget said.

A recent IMF forecast also shows that Greece will be the fourth fastest growing GDP once 2019 is said and done after the country “has gone through several years of depression.”

Inside the GREK ETF

Global X wrote a piece earlier this year on what has been sparking the rally in GREK.

“Greece’s stock market is off to a strong start in 2019, helped by the country’s broad economic growth reaching its fastest annual increase since 2007,” wrote Chelsea Rodstrom. “At the end of Q2, the markets were up 40.4% making it the best performing emerging market year to date (YTD). Growth forecasts project annualized 2019 GDP at 2.4%, versus the 1.3% forecasted for broader Europe. And after issuing its first 10-year bond in years, yields on the notes fell to all-time record lows. Greece’s improving growth prospects could help place it in the midst of a virtuous cycle, standing out against the weak backdrop of a sluggish Europe. Following the July 7th elections, which were pushed up from October, we reflect on Greece’s strong first half to 2019.”