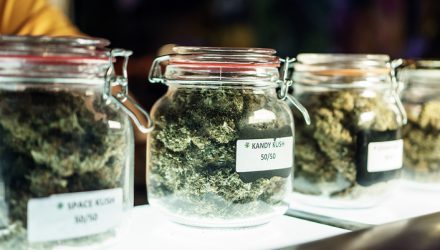 Global X is looking to roll out a cannabis exchange traded fund of its own. A recent filing with the Securities and Exchange Commission (SEC) provides details about the Global X Marijuana ETF. That ETF will track Solactive AG’s Marijuana Index.

“In order to be eligible for inclusion in the Underlying Index, a company is considered by the Index Provider to be a Marijuana Company if it derives at least 50% of its revenue, operating income, or assets from the marijuana industry value chain,” according to the SEC filing.

Solactive AG’s Marijuana Index has several qualifiers for it constructs its universe of investable marijuana stocks.

“These companies include those involved in the following areas of the marijuana industry value chain: (i) the legal production, growth and distribution of marijuana (including industrial hemp), as well as extracts, derivative products or synthetic versions thereof; (ii) financial services related to companies involved in the production, growth and distribution of marijuana, including insurance offerings, property leasing, and investments; (iii) pharmaceutical applications of marijuana; (iv) cannabidiol (better known as CBD) and cannabis oil products, edibles, topicals, drinks and other products; and (v) products that may be used to consume,” according to the filing.

The legal cannabis market in the U.S. is still in its formative stages. Roughly a quarter of the 50 states and Washington, D.C. have legalized marijuana for recreational purposes and almost half have legalized it for medicinal use. Recent data indicate many Americans support cannabis legalization.

The Global X filing does not feature a ticker or expense ratio, indicating its marijuana ETF probably is not close to being launched.