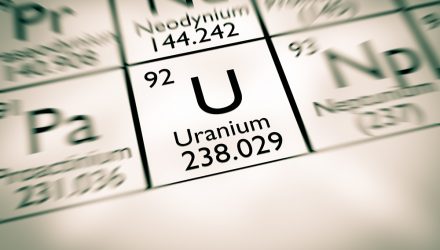 Uranium, which is responsible for generating nuclear fuel, might be poised for nuclear gains if bullish forecasts hold up. The Global X Uranium ETF (URA) is all ears.

Overall, URA seeks to provide investment results that correspond generally to the price and yield performance, before fees and expenses, of the Solactive Global Uranium & Nuclear Components Total Return Index. The fund invests at least 80% of its total assets in the securities of the underlying index and in American Depositary Receipts (“ADRs”) and Global Depositary Receipts (“GDRs”) based on the securities in the underlying index.

The underlying index is designed to measure broad based equity market performance of global companies involved in the uranium industry.

“Analysts with a bullish lean believe the uranium market cycle has reached its bottom and that a break to the upside for uranium prices is supported by positive supply and demand fundamentals,” an Investing News article stated. “On the supply side, major uranium producers are still cutting back on their output levels while new uranium exploration projects are few and far between.”

“Canada, Australia, Niger and Namibia are also among the world’s biggest uranium producers,” the article said. “In Canada, Cameco shuttered the Saskatchewan-based McArthur River mine in 2018 and temporarily closed Cigar Lake — the world’s top uranium mine — in response to the coronavirus pandemic. In the second quarter of 2020, Philip Johnson of nuclear fuel cycle firm UxC forecasted a uranium production decline of 13.1 million pounds for the year.”