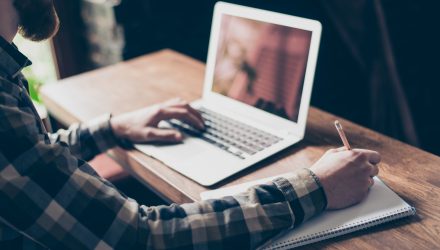 The O’Shares Global Internet Giants ETF (NYSEArca: OGIG) is one of the newer options among Internet exchange traded funds, but a combination of favorable fees and diverse geographic exposure make it a compelling option in the crowded field of Internet ETFs.

Some of OGIG’s top portfolio holdings includes companies such as Alibaba, Amazon, Facebook, and Alphabet, each of which represents 6- to 6.5-percent of the overall portfolio. Also amongst the index’s 52 holdings are Chinese tech companies like YY, Baidu, 58, and JD. For long-term investors, OGIG’s exposure to ex-US e-commerce and Internet companies is relevant and important

“Developed countries are nearing Internet adoption saturation. North America and Europe account for roughly 15% of the world’s population and are nearing full adoption at 95% and 85%, respectively,” according to O’Shares research. “Asia and Africa, on the other hand, have populations exceeding 4 billion and 1 billion, respectively, accounting for over 70% of the world’s population but have much lower adoption rates. Only half of Asia is online and that proportion drops to nearly a third for Africa. As Internet adoption rates in Asia and Africa converge with developed markets, growth in Internet and e-commerce will likely follow suit.”

E-Commerce As A Driver