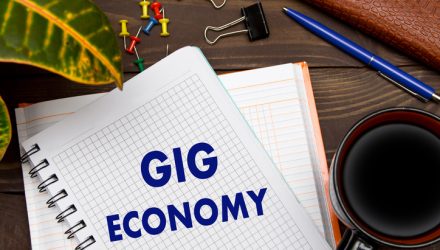 GIGE seeks long-term capital appreciation by providing exposure to companies involved in the revolutionary shift towards a “gig” economy, a free-market system comprised of freelancers and shared resources, such as transport and real estate.

As a relatively new fund, Lydon explained how the current trend of “gig” economy speaks to what that really is, which is essentially something on the side of what you do. So in regards to GIGE, this is an additional way to enhance income.

Lydon continued by giving credit to SoFi for bringing a lot of young Americans into the fold and being able to survey them regularly. This data allowed the company to realize that one out of every two have had some “gig” along the way to help them enhance their portfolios.

When asked about SoFi being a new fund sponsor, Lydon agreed with how fresh they are to the scene, adding that the company was not initially started for the sake of creating ETFs. “It was really a company that was put together to help students better handle student debt.”

Keeping It Fresh And Getting Help

With that in mind, SoFi has partnered with other distributors in the industry to package and put ETFs out that are more in line with what the younger generations are up to in the modern world. Lydon stated the importance of finding a great career but also acknowledged how beneficial it could be to have something on the side to make life a bit better.

Speaking on if there’s any reason to worry, given what SoFi started as, before launching GIGE, Lydon explained how Toroso Investments, a company already in the ETF business, partnered with SoFi, allowing for back up in regards to having experienced support.

“What we’re finding today is that a lot of companies outside of the money managing business, that are seeing opportunities to take what they’re specializing in, wrap it up, and package a suite of ETFs; it might specifically be interesting to investors,” Lydon continued. “Especially if it’s got a long runway, like the “gig” economy.”

Addressing the role a fund like this can play in diversifying a portfolio, Lydon notes examples such as PayPal (NASDAQ: PYPL), Etsy (NASDAQ: ETSY), and eBay (NASDAQ: EBAY), noting how these tech companies can go along with smaller ones like Upwork (NASDAQ: UPWK), that function as ones operating smaller-scale businesses focused on selling services, items, promotions.

These are the sort of companies that can help people find jobs or opportunities for additional income. “In most cases, when you look at the numbers of what these “side hustles” or “gigs” may be, it’s not like we’re talking, on average, $30 or $40 thousand a year,” Lydon explained. “On average, it might be $5 – $15 thousand for the average person, who’s got a gig.”

It still means a lot for those lifestyles, and these tools or companies can do plenty to put someone in that sort of position.

Speaking on how much these “gigs” can be effected by IPO activity, Lydon makes it clear that other companies will come along and be considered, but for now, Toroso has been responsible enough not to make any sudden reactions to IPO putting companies into the index.

Jaffe’s final question about GIGE and SoFi was in regards to whether this will become a 200-day moving average play when it has been out long enough, Lydon was confident, explaining how legacy indexes are very different than they were ten years ago, and what matters is positioning a portfolio to participate in something that could be the next FANG.

GIGE is an ETF that may be able to approach that level, but investors can’t do that if their reliance remains solely in legacy indexes. Lydon concludes, “You have to think about future-proofing your portfolio, looking at future technology, and looking at future trends because this next generation is going to be different than our generation.” New companies around going to profit from that.

Hear What Tom Lydon Had To Say About GIGE ETF: