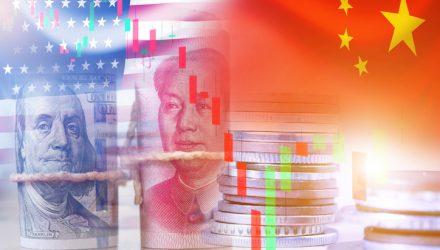 MCHI seeks investment results that generally correspond to the price and yield performance, before fees and expenses, of the MSCI China Index.

Understandably, there are reasons for people to want to be exposed to China. That said, is the time right, even with unresolved trade tensions? Lydon believes so.

Lydon pointed to the rebound in emerging markets and China at the end of 2019, thanks to better resolution talks, a trade deal feels closer to getting done. With that in mind, investors shouldn’t have to consider a China allocation after the fact.

Another reason to consider is MCHI ETF, its index that is coming in currently at almost 40% off from a valuation standpoint. After taking a bit of a beating, many Chinese stocks are falling into the value category.

Jaffe points out China A-shares, which means buying shares of the companies in China. This brings concern for how MCHI handles this aspect. As Lydon points out, he’s a big fan of A-shares because it creates the ability for investors outside of mainland China to buy their companies. This wasn’t possible a few years ago.

“It is possible today,” Lydon said. “It is possible in the form of variety for ETFs. In this case, with MCHI ETF, it’s not necessarily the case. You’re seeing, in this ETF, a lot of companies that are big and the most liquid. When you think about the China trade situation, and you think about a rebound (and there is going to be volatility, as there’s uncertainty for sure), you want to make sure you are in the most liquid stocks.”

Lydon continues by adding that the most liquid stocks are in this index. Still, it would not be unwise to look into A-shares. Lydon even suggests that if a trade deal is pending, A-shares may perform even better to the upside. However, it layers in another level of uncertainty and risk.

So, if an investor does not have an allocation towards China, MCHI ETF is something widely held, trades very effectively, and relies on some of the most liquid individual companies in China.

Jaffe then asks if this is a scenario where it’s best to tilt specifically towards China or keep the other emerging markets just as involved. Lydon feels the average portfolio of American citizens tends to be under-allocated towards emerging markets, based on previous underperformance. As a result, it would be good to readjust, as investors could have a much better standing in that area, given where things are currently.

That being said, most diversified emerging markets mutual funds and ETFs have about a 30-35% allocation to China, due to the natural cap-weighting of international markets in the emerging markets space. So, if investors do want to diversify within emerging markets, that’s great, there’s already a decent China allocation.

“For those trend followers out there,” Lydon adds, “China has been an area that’s been more volatile than some other emerging markets countries, so if you do want to play China on its own individual trend, here’s something to consider. Keep an eye on the 200-day average, MCHI is shortly above the 200-day average right now, and I think there are going to be continued volatility in China over time, and it’s a great area of the market to play with the trend-following technique.”