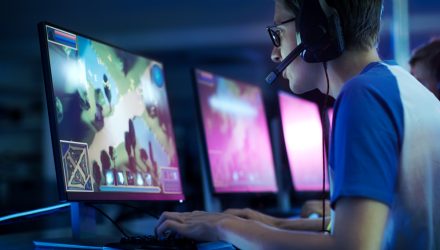 There has been plenty of talk about esports and video game ETFs, including the Global X Video Games & Esports ETF (NASDAQ: HERO), being one of the few bright spots in the coronavirus-induced equity market downturn.

Talk is cheap, but fortunately, data confirm heroes and rivals are outperforming this year. HERO, which launched last October, “seeks to invest in companies that develop or publish video games, facilitate the streaming and distribution of video gaming or esports content, own and operate within competitive esports leagues, or produce hardware used in video games and esports, including augmented and virtual reality,” according to Global X.

“Professional sports leagues around the world are dark due to COVID-19. But in recent weeks, pro athletes joined the video game frenzy to help fill the competitive void,” according to Global X. “The Race All-Star Esports Battle featured pro drivers from Formula 1, IndyCar and NASCAR. A half a million fans tuned in via YouTube for the inaugural event on March 15. Rounds 2 and 3 of the new series were rating hits as well.”

In fact, one of the recent eNASCAR competitions was the most viewed esports competition ever.

One catalyst for gaming equities has been a variety of data points confirming that Chinese gamers are buying more video games as they are forced to stay inside due to the COVID-19 outbreak. However, there’s more to the story for HERO and rival funds this year. However, the good times aren’t confined to China’s video game appetite.

“In the NBA, the Phoenix Suns are playing out their season on NBA 2K20,” notes Global X. “Following their first game against the Dallas Mavericks, 2k simulations have started to appear more regularly. Live, in-person sporting events may not be in the cards for a while. But this could be an opportunity for Esports and online video game streaming to continue their march into the mainstream.”

“Activision’s highly anticipated launch of Call of Duty: Warzone did not disappoint,” said Global X. “The company set a record for the greatest number of gamers acquired over the shortest period of time; it grabbed 6 million gamers on the game’s first day, 15 million in three days and 30 million in 10 days.”