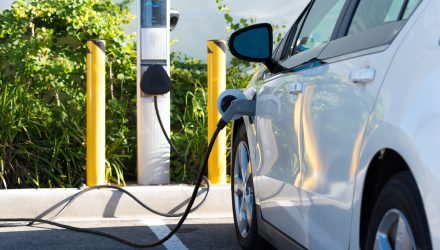 Obviously, Tesla is dragging plenty of electric vehicle makers higher, but there’s more to the story with the Global X Autonomous & Electric Vehicles ETF (NASDAQ: DRIV). DRIV is higher by 5.35% over the past week and resides near record highs.

DRIV seeks to provide investment results that correspond generally to the price and yield performance, before fees and expenses, of the Solactive Autonomous & Electric Vehicles Index. DRIV’s index “includes companies involved in the development of autonomous vehicle software and hardware, as well as companies that produce EVs, EV components such as lithium batteries, and critical EV materials such as lithium and cobalt,” according to Global X.

As the EV industry grows, so are groups designed to facilitate the adoption of these gas-free vehicles.

“A coalition called the Corporate Electric Vehicle Alliance (CEVA) launched under the auspices of the green investor organization Ceres this year, with the stated aim of accelerating the electrification of fleet vehicles across the U.S.,” reports Tina Casey for Triple Pundit. “The move is significant because it demonstrates that corporate demand for electric vehicles can still move the market on a national basis, despite conflicting policy signals from the federal government.”

Electric vehicles are hitting the road, and the International Energy Agency, an advisory council to energy-consuming countries, projects the world will have 125 million electric cars by 2030. Investors can also targeted exposure to this growth through sector-specific ETF strategies.

The IEA, though, also sees a way for the EV industry to pump out 220 million electric vehicles by 2030 if global economies take on a more aggressive approach to combat climate change and to cut emissions than currently planned.

Given the policies in place today, China and Europe will be among the biggest adopters of EVs. In China, credits and subsidies could help EVs grow to over a quarter of the car market by 2030. In the meantime, tightening emissions standards and high fuel taxes across Europe could make EVs account for 23% of the market.