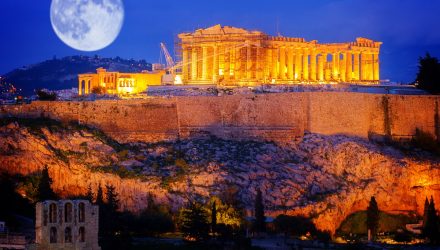 The Global X MSCI Greece ETF (NYSEArca: GREK), the only exchange traded fund dedicated to Greek stocks, is up 22% this year, making it one of the best-performing single-country ETFs tracking a European economy.

Greece’s resurgent economy is benefiting equity markets there. Fundamentals may continue to support the strength in Greek markets. The Mediterranean country is on pace for its fastest growth since 2007 and authorities are moving ahead with plans to offload bad debt on bank balance sheets, which for years have weighed on the country’s recovery.

“Greece’s strong equity market returns came amid the ongoing push to clean up bad debt from bank balance sheets,” said Global X in a recent note. “As a result, financials lead the way as the biggest positive contributor to performance during the quarter. Causes for optimism in the Financials space include increased liquidity in local financial institutions, with banks having almost fully repaid emergency European Central Bank (ECB) liquidity assistance.”

Underscoring the benefits of the improving Greek economy for GREK, the fund is highly cyclical as highlighted by large weights to the energy and financial services sector.

Another good sign for GREK is the resurgence of the Greek consumer. GREK allocates more than 17% of its weight to consumer discretionary stocks.

“Further powering returns was a recovery in consumer confidence to almost pre-crisis levels,” according to Global X. “Private consumption helped drive in strong performance during Q1 within the communication services sector and the casinos & gaming sub-industry. Such improvements follow labor gains with unemployment falling by 3% in 2018 and national account data reflecting improvements in labor productivity.”

As is often the case with GREK, Greek politics need to be considered, particularly with Greece holding legislative elections later this year.

Related: Greece ETF Strengthens on One of Its Best Runs in Years

“Political risk is notable, but with potential upsides as well,” said Global X. “Legislative elections are scheduled for October; however, they could be pushed up to May 26 to coincide with local and European elections. The ruling hard-left Syriza party is likely to demand snap elections to minimize the party’s losses ahead of European elections and before a slowdown in Europe potentially curbs Greece’s progress.”