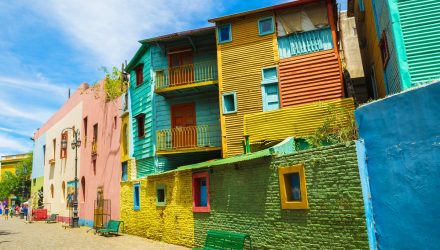 When investors think of e-commerce and the related investments, they usually focus on the U.S. and companies such as Amazon.com Inc. (NASDAQ: AMZN) first, and then, maybe, give a look to China. They may want to acknowledge Latin America in the online retail conversation.

Shares of Argentina-based MercadoLibre, Inc. (NASDAQ: MELI), often referred to as the “eBay of Latin America,” surged Friday after the coming reported better-than-expected first-quarter results. In midday trading in New York, the stock was up 19%, providing a boost to exchange traded funds (ETFs) with significant exposure to the stock.

For example, the Global X MSCI Argentina ETF (NYSEArca: ARGT) was up nearly 8% in midday trading. ARGT, the first US-listed ETF dedicated to Argentina, allocates nearly 28% of its weight to MercadoLibre, making the online retailer by far ARGT’s largest holding. ARGT, which is more than eight years old, tracks the MSCI All Argentina 25/50 Index.

ARGT’s big weight to MercadoLibre means the ETF allocates almost a third of its weight to the consumer discretionary sector, a group that could be pinched if Argentina slides into a deep recession. Weighing on economic activity are Argentina’s interest rates, which are among the highest in the world. Argentina is South America’s second-largest economy behind Brazil.

Susquehanna’s James Friedman “thinks the company will focus on boosting revenue on its shopping platform by rolling out free shipping to more customers, which may help draw in customers at the expense of margins,” according to Barron’s.

Argentina holds national elections later this year, meaning incumbent politicians there would like to bolster economic growth as soon as possible.

“The Macri administration is under mounting pressure to restore economic growth before the presidential elections in October 2019,” said Markit. “The risk of loosening the monetary policy too fast, before the inflation rate is on a more sustainable path, has temporarily diminished since the February currency volatility; however, it is still significant, and it will expose the country’s vulnerabilities that have not been comprehensively dealt with since the 2018 confidence crisis.”