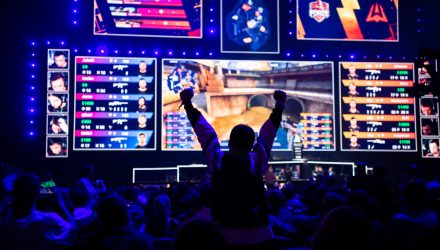 A prominent theme emerging in the wake of the coronavirus pandemic is the buoyancy of esports and video game investments benefiting from the stay at home trend. Just look at the Global X Video Games & Esports ETF (NASDAQ: HERO), which is up 14.31% year-to-date after hitting an all-time high last Friday.

“Esports is the fastest-growing theme in the gaming sector. These organized multiplayer video game competitions have enjoyed spectacular growth over the last decade, with thousands of fans filling stadiums to watch live events and millions following them on streaming platforms,” according to GlobalData. “Although esports currently caters to a niche audience – almost 10% of the global online population of around 4.5 billion – its reach is expanding rapidly.”

HERO’s underlying index features 38 stocks from nine countries. The bulk of the new ETF’s top 10 holdings are video game publishers, but the fund has exposure to hardware makers and semiconductor manufacturers, among other industries, as well. Speaking of hardware, HERO could benefit from a looming console upgrade cycle coming later this year.