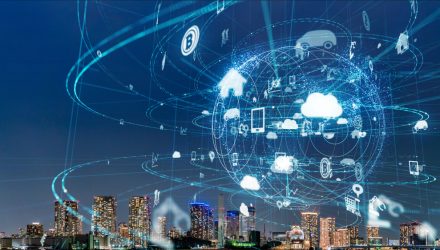 Capitalize on Connectivity With This Thematic ETF

The Internet of Things (IoT) is at the forefront of a slew of disruptive, emerging technologies, including increased connectivity. The Global X Internet of Things Thematic ETF (NasdaqGM: SNSR) is one of the premier avenues among ETFs for accessing the booming IoT theme.

“The global market for Internet of things (IoT) end-user solutions is expected to grow to 212 billion U.S. dollars in size by the end of 2019. The technology reached 100 billion dollars in market revenue for the first time in 2017, and forecasts suggest that this figure will grow to around 1.6 trillion by 2025,” according to Statista.

With tens of billions of devices around the world already connected and many more set to join the fray in the coming years, the seeds of exponential growth for the IoT market and perhaps SNSR are being sewn today.

“Tens of billions of these IoT connected devices already exist around the world and this number will only grow as internet connectivity begins to become a standard feature for a great number of electronics devices,” notes Statista. “Although heavily integrated into the consumer electronics market, IoT extends far beyond handheld devices and home appliances; IoT subsystems such as industrial internet and connected cities aim at automating factories and urban areas rather than just households.”

As is seen with some other disruptive technologies, the healthcare sector is potentially fertile ground for IoT growth.

“According to research conducted by a network provider company in Aruba, nearly 87% of the healthcare organizations across the globe will adopt IoT services by 2019,” notes Grand View Research. “Researchers surveyed approximately 3,100 IT enterprises including healthcare and business decision-makers across 20 countries. This study concluded that healthcare institutions have introduced IoT for improving patient monitoring, fostering innovations, and reducing costs.”