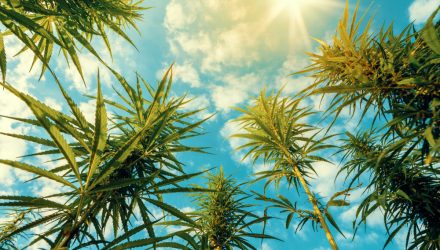 Up 43% since the start of the second quarter, the Global X Cannabis ETF (NASDAQ: POTX) is definitely benefiting from the stay-at-home directives forced by the coronavirus and while we’re not of the woods with the pandemic, POTX and rival cannabis ETFs could be worth a look as the economy reopens.

POTX, the first cannabis fund from Global X, follows a benchmark that holds “companies involved in the legal production, growth, and distribution of cannabis and industrial hemp, as well as those involved in providing financial services to the cannabis industry, pharmaceutical applications of cannabis, cannabidiol (i.e., CBD), or other related uses including but not limited to extracts, derivatives or synthetic versions,” according to Global X.

Some market observers that with states reeling from revenue shocks endured during a multi-month shutdown, legislators in those areas are looking for new ways to raise revenue and that could include permitting new vices in a bid to generate “sin taxes.”

Younger demographics are often viewed as the primary consumers of marijuana and important drivers for the long-term cannabis investment thesis. With 2020 being an election year, there could be some political factors at play that could lead to the upside for POTX later this year.

That’s a good segue to discussing states’ need for revenue and how furthering cannabis legalization factors into that equation.

“In May, a group of New York state senators announced plans to legalize recreational cannabis sales, which may be a sign of things to come. Spending by state and local governments to combat the COVID-19 crisis has been massive, and in many cases are causing deep budget deficits,” said Global X in a recent note.

Scrambling for cash, New York appears to be inspired by marijuana revenue that’s surging in Colorado.

“In New York City, the budget shortfall surged by $1.6 billion over May,” according to Global X. “Finding new sources of revenue is critical to balancing budgets, and taxing legal cannabis sales could help. In Colorado, where cannabis is already legal, the state’s Department of Revenue reported that it collected $104 million tax revenue from January to April. With a global recession looming, the economic benefits of legalized cannabis could be too enticing for states, and countries for that matter, to ignore.”