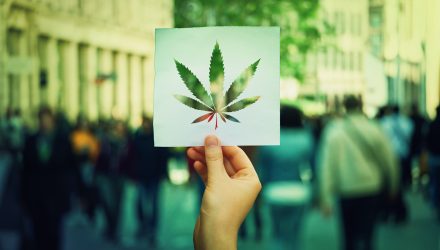 MJ seeks to provide investment results that correspond generally to the total return performance of the Prime Alternative Harvest Index. The index is concentrated in the pharmaceuticals and tobacco industries and tracks the performance of the exchange-listed common stock of companies across the globe.

“Cannabis stocks have been a volatile but largely outperforming group in 2019. Yet Bank of America Merrill Lynch warns that while some companies are living up to the hype, others have risen too far, too fast, and investors could get burned,” reports Teresa Rivas for Barron’s.

Some Good Ratings, One Bad

“On Wednesday, BofA Merrill Lynch’s Christopher Carey initiated coverage on a handful of cannabis stocks, with three Buy ratings and one Underperform,” according to Barron’s. “His bullish picks are Aurora Cannabis, Canopy Growth, and HEXO (HEXO), with the latter the most attractive of the trio, while he thinks investors should steer clear of Cronos.”

Aurora Cannabis (NYSE: ACB) and Canopy Growth (NYSE: CGC) are MJ’s largest and third-largest holdings, respectively, combining for nearly 17% of the fund’s weight. HEXO is also a top 10 holding in MJ at a weight of 4.22%. Cronos, which Bank of America Merrill Lynch tagged with an Underperform rating, commands a weight of 6.40% in MJ.

“Carey expects an underdeveloped supply chain will continue to crimp Canadian cannabis companies, and while the market appears to be bracing for that, his estimates for 2019 and 2020 are still below consensus. Yet he still thinks in this environment that his Buy-rated stocks can outperform,” reports Barron’s.