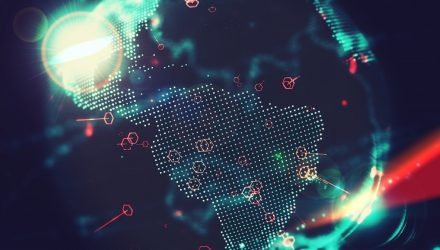 Brazil country-specific ETFs were among the best performers Tuesday, with Brazilian benchmarks breaking into new record highs, as traders placed their hopes on promised pro-market reforms and President Jair Bolsonaro met in the White House with President Donald Trump.

The benchmark Ibovespa Index in Sao Paulo hit an intra-day record of 100,037.69 before closing at its highest level ever of 99,993.93 Tuesday, The Business Times reports.

Brazilian markets have advanced more than 13% since Bolsonaro took office on January 1, breaking a dozen records over the first month of his administration, as investors hoped the populist leader would fulfill his election road pledges of economic reforms.

Bolsonaro has made privatizing state-owned companies and overhauling a costly pension system both key points in his administration as a way to cut down the soaring public debt and regain foreign investors’ confidence in the Latin American economy.

The new highs also coincided with Bolsonaro’s visit to Washington where he met with U.S. counterpart President Trump. The Brazilian President has long expressed his admiration of Trump, sharing the U.S. leader’s aversion toward multilateral organizations and leftists politics, along with a favorable stance toward promoting businesses interest to stimulate the economy.

In Washington, Bolsonaro appears eager to strike an alliance with Trump to forge a strong U.S.-Brazilian bilateral relationship, CNBC reports.

“For the first time in a long time, a Brazilian President who is not anti-American arrives in Washington,” Bolsonaro tweeted on Sunday. “It is the beginning of a partnership for freedom and prosperity, as Brazilians have always wanted.”