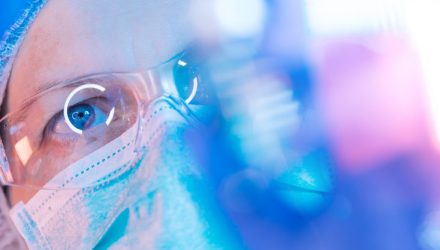 The SPDR S&P Biotech ETF (NYSEArca: XBI), which rallied earlier this week amid some deal-making in the sector, is up 7.70% this month and some market observers believe biotechnology stock can extend their recent bullishness.

XBI one of the largest biotechnology exchange traded funds (ETFs), has a rich history of delivering summer upside.

Healthcare stocks are also showing attractive valuations relative to other defensive sectors, which are richly valued. Biotechnology historically trades at multiples that are elevated relative to broader benchmarks, but after last year’s struggles for biotechnology names, analysts see value with some big-name biotech stocks.

“In the last month this group has actually been the best-performing sector of any of the major groups,” said Newton Advisors technical analyst Mark Newton in an interview with CNBC. “Just in the last couple of weeks, you’ve seen this entire downtrend since late last year be broken in health care relative to the S&P,” he said of a trendline stretching from its peak in December to mid-May.

XBI and the Case for Biotech Investments

Adding to the case for biotech investments is that, broadly speaking, valuations in the group currently are not excessive. That is something to consider when noting biotechnology stocks often trade at premiums to the healthcare sector and broader market.

“Biotech stands out as being very strong,” said Newton in the CNBC interview. “I do think that the group can really move up to the high $80s, lows $90s when you look at that ETF, the XBI for the biotech group, and so that’s certainly one area to play this.”

XBI is an equal-weight fund meaning the ETF is not heavily dependent on large-cap biotech names. That also means XBI is home to some credible takeover targets, which is potentially good news for investors at a time when healthcare M&A activity is surging.