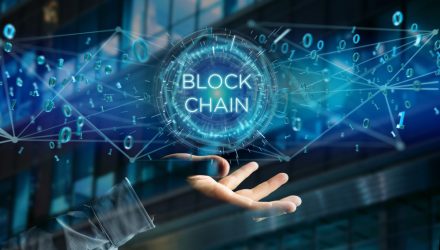 Betting on Blockchain Is Getting Renewed Attention With Good Reason

There was a time when blockchain investments and cryptocurrencies were joined at the hip, often diminishing the allure of the former because of the volatility associated with the latter.

However, there’s more to the blockchain story than bitcoin and other digital assets and with blockchain spending poised to boom, ETFs such as the Amplify Transformational Data Sharing ETF (BLOK).

According to Amplify, “BLOK is an actively managed ETF that seeks to provide total return by investing at least 80% of its net assets in equity securities of companies actively involved in the development and utilization of blockchain technologies.” Amplify classifies each company included in the index as either “core” or “secondary” based on how closely-tied the company’s business is to blockchain development.

“According to CB Insights, spending on blockchain solutions will surpass $16 billion by 2023. The data suggests that 58 industries have practically limitless potential. It is no secret that blockchain technology is on the rise and it’s here to stay,” reports Forbes.

Blockchain, the underlying technology that forms the basis for cryptocurrencies, has plenty of other real-world uses. Blockchain itself has been a hot topic with companies like investment firm UBS looking to implement the transactional technology in the financial sector. Other industries, including healthcare and retail, are expected to be major adopters of blockchain.

“Banking in the last decade has given much more attention to digital services and non-traditional services such as PayPal and CashApp mean that people have less need to physically interact with banks. Decentralized finance (DeFi) could be a catalyst for taking banking fully digital,” according to Forbes.

Blockchain continues to capture investor interest as the technology keeps gaining mainstream attention. According to the World Economic Forum, “10% of the global GDP is predicted to be stored on blockchain platforms by 2027.”

As is being witnessed in the fintech space, the COVID-19 pandemic is providing a runway for blockchain to show the utility of its financial service in markets outside the U.S.

“The blockchain is already being applied to international settlements and remittances such as in the Middle East and the ongoing COVID-19 outbreak means that there is even a great need for digital services,” according to Forbes.

BLOK is up almost 37% in the current quarter.