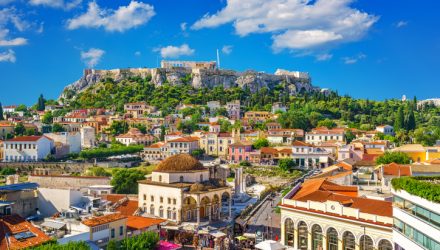 Another Ray of Light For This Hot Greece ETF

The Global X MSCI Greece ETF (NYSEArca: GREK), the only ETF dedicated to Greek stocks, is up more than 37% year-to-date, making it one of the best-performing emerging markets and single-country Europe ETFs in 2019.

The Greek economy has consistently been improving over the past couple of years and the country recently, to the surprise of some market observers, issued negative-yielding debt, meaning investors are paying for the privilege of owning those sovereign bonds. Importantly, signs continue emerging that Greek banks are firming.

“The launch of an asset protection scheme in Greece is credit positive for the country’s banks, Fitch Ratings says, as it should help them to accelerate the reduction of the large stocks of legacy non-performing loans (NPLs) that weigh on their capital, profitability and ability to lend,” said the ratings agency in a recent note.

Bolstering Greek banks is important for GREK because the fund devotes 30.67% of its weight to the financial services sector, by far the fund’s largest sector weight.

“Banks in Greece, Europe’s most indebted country, hold some 75 billion euros in soured debt, boosting costs for provisions and restricting their ability to generate new loans. The guarantee program, known as an asset protection scheme, could cut that down by at least 20 billion euros, the government estimated when the plan was first floated about a year ago,” according to Bloomberg.

“Greece’s new government is being more proactive with policy implementation to tackle the asset quality problems in the banking sector,” according to Fitch. “The asset protection scheme has scope to cover up to 40% of the sector’s EUR75 billion NPLs (end-June 2019). Greece’s four domestic systemically important banks have non-performing exposure (NPE) ratios ranging between 33% and 51%, among the highest in Europe, and have ambitious targets to reduce these, largely through securitisations and portfolio sales (NPEs comprise NPLs and certain other unlikely-to-pay obligations).”

Related: Another Reprieve For The Greece ETF

There are some risks to employing bank reforms, but analysts believe Greece should be able to temper those risks.

“While there are execution risks involved in the set-up and usage of the scheme, the precedent in Italy and the market experience gained from some NPL securitisations in Greece this year should smooth the process and support market acceptance,” notes Fitch.