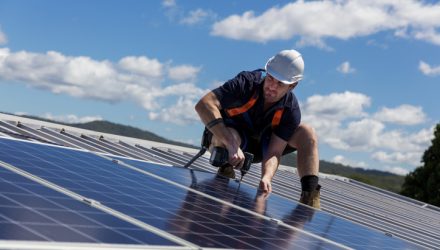 After a Rest, Energy ETFs Can Keep Rallying

The attack came at an oil processing facility at Abqaiq and at a nearby Khurais oil field on Saturday, hamstringing 5.7 million barrels of daily crude production or 50% of the kingdom’s oil output. Saudi Aramco, the national oil company, reportedly is attempting to restore about one-third of its crude output, or 2 million barrels by Monday. However, Bloomberg News reported it could take weeks before Aramco restores the bulk of its production at Abqaiq.

However, XLE and rival energy ETFs pulled back Tuesday as oil prices retreated amid reports that the largest producer in the Organization of Petroleum Exporting Countries (OPEC) will likely be able to restore much of that lost supply faster than previously expected. Even with that in mind, some market observers believe the once downtrodden energy sector can keep moving higher.

“The XLE energy ETF is down more than 1% on Tuesday after racing 8% higher for the month. The sector saw a massive surge on Monday after crude oil popped following an attack on a Saudi Arabian processing facility,” reports CNBC. “Bill Baruch, president of Blue Line Futures, says any further gains in crude oil and energy stocks could be crimped by historical trends.”

Examining The Energy Of XLE

Another reason to consider XLE and energy ETFs is that Wall Street likes the sector ahead of upcoming third-quarter earnings.

“At the sector level, analysts are most optimistic on the Energy (66%) sector, as this sector has the highest percentage of Buy ratings. It is interesting to note that the Energy sector is projected to report the largest earnings decline of all 11 sectors in CY 2019 (-20.9%) and the largest earnings growth of all 11 sectors in CY 2020 (30.2%),” said FactSet.