You are at:Home»Thematic Investing Channel»Access the AI Investing Revolution With ‘BOTZ’ ETF 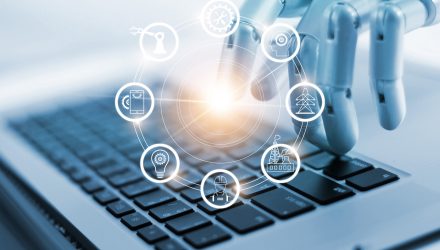 The $1.61 billion BOTZ is considered a thematic ETF. A thematic approach includes investments that stand to benefit from structural change driven by demographic and technological changes. BOTZ, which debuted in September 2016, targets the Indxx Global Robotics & Artificial Intelligence Thematic Index.

The AI exposure provided by BOTZ is important at a time when AI is disrupting and transforming myriad industries.

“The impact of AI will be disruptive to many—if not all—industries,” said IHS Markit. “The disruption will reverberate even in sectors not traditionally known to be connected to industry, such as academia and the educational system, since education is a key component of AI. In fact, AI’s impact will be felt by our entire society.”

Robotics and artificial intelligence are making machines smarter and more capable than ever before, allowing robots to take on increasingly sophisticated tasks for faster and more accurate production.