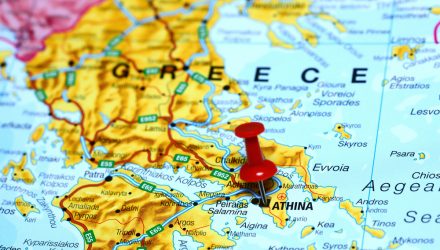 A Strong Q2 Puts This Greece ETF in Focus

COVID-19 battered Greece’s economy like it did the rest of the global landscape, but things are turning around — the country’s GDP gained in the second quarter, giving ETFs like the Global X MSCI Greece ETF (GREK) recognition.

“COVID-19’s choke hold on Greece’s economy, battered by lockdowns aimed at slowing the pandemic, eased so much in the second quarter of the year that an unexpected 16.2 percent gain was realized,” an article explained in The National Herald. “The Hellenic Statistical Authority recorded the phenomenon that came after the government and Bank of Greece said they had forecast annual growth of only as much as 3.6 percent, hoping tourism would raise it.”

As one of the first and only ETFs to provide single country exposure to Greece, GREK seeks to provide investment results that correspond generally to the price and yield performance, before fees and expenses, of the MSCI All Greece Select 25/50 Index. The fund invests at least 80% of its total assets in the securities of the underlying index and in American Depositary Receipts and Global Depositary Receipts based on the securities in the underlying index.

The ETF is showing its strength in the year-to-date chart with a nearly 12% gain. However, when you stretch out the performance numbers to one year, you can see exactly how far the fund has come with just over a 41% gain.

Vote of Confidence From Greece’s Leaders

Greece’s economic fundamentals are drawing praise from the country’s leaders, according to The National Herald article. Prime Minister Kyriakos Mitsotakis couldn’t be happier with the better-than-expected numbers, especially during the rising COVID-19 cases.

“Even during a period with partial lockdowns, quarterly GDP (Gross Domestic Product) is already above pre-pandemic levels. We remain focused on reforms that deliver inclusive growth and raise living standards for all,” Mitsotakis wrote on Twitter.

“This growth rate is higher than the original forecasts,” said Staikouras. “It confirms the strong recovery of the Greek economy,” that was driven down by the closing of non-essential businesses.

The period between April to June also marked Greece’s most productive quarter within the last 10 years. Consumer spending was up 0.2% from the first quarter and 12.1% from a year earlier.

“Given the positive course of all components of domestic demand, that is consumption, investments, net exports and the constant increase of indexes such as those of economic sentiment, industrial output, manufacturing, construction activity and tourism arrivals, the course of the gross domestic product will be better than the estimates made in the Midterm Fiscal Strategy Framework,” said Staikouras.