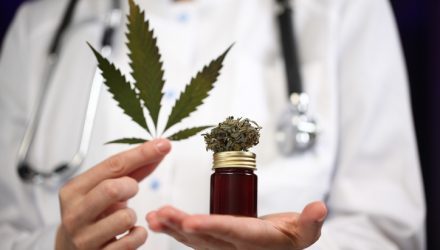 A POTX Perk up Could be in the Works

Marijuana ETFs, including the Global X Cannabis ETF (NASDAQ: POTX), are scuffling again to start 2020, but the new year is still young and some analysts believe the cannabis ship get its course right as this year moves along.

“After a crop of disasters struck marijuana stocks in 2019, the cannabis analysts at Stifel expect a rebound in the first half of this year. Ontario store openings should uncork a Canadian bottleneck, says the broker, while U.S. operators will grow out of the shadow of their stumbling northern counterparts,” reports Bill Alpert for Barron’s.

As of the end of the third quarter, POTX allocated nearly 82% of its weight to Canadian cannabis producers, meaning the fund is highly levered to a potential rebound by those names.

Canada is potentially one of the most lucrative marijuana markets in the world, but the country has some issues to work through before publicly traded producers there can truly benefit.

“Canada mishandled the retail end of pot legalization, especially in its most populous province of Ontario,” according to Barron’s. “By the end of 2019, the western province of Alberta had 300 stores, while the threefold more populous Ontario had fewer than 25. That meant that Toronto consumers continued to patronize their black-market dealers and producers like Canopy had to take back unsold inventory from the provincial wholesaler.”

“Retail sales grew strongly, nevertheless, with the market doubling in many states. Stifel expects growth to continue in 2020 at a rate of at least 25%, powered by new recreational markets such as Illinois,” notes Barron’s.