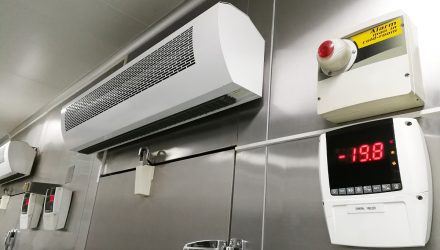 Cold storage warehouses are essential for keeping things like perishable food items and blood at the correct temperature before they go to their final destinations. Challenges pose obstacles for companies dealing with cold storage, but robots are helping to overcome them. Here are four examples:

The harsh temperatures in a cold storage warehouse mean that human workers exposed to such environments have to take precautions by wearing protective gear and taking adequate breaks. Research indicates that employees are at risk of health and safety issues after staying in refrigerated rooms for at least eight hours.

One meat and frozen food producer decided to use robots to limit the amount of time humans spent in cold conditions and maintain a steady workflow. It uses a palletizing robot with a pallet capacity of 15 that can work for extended periods with limited or no human oversight. The robot also works inside a heated suit-like enclosure that keeps its parts warm enough for optimal operations.

When a cold storage facility has large-scale operations and/or serves an international customer base, it becomes increasingly difficult to prepare and distribute the contents as quickly as the market needs require. However, Nolan Meats is an Australian brand that recently opened the largest meat-chilling and distribution center in the Southern Hemisphere.

The automation aspect is reportedly a substantial factor that allows the brand to keep beef maximally fresh, improving its presentation for domestic or international customers. For example, thanks to the robotic equipment, the brand can hard-freeze up to 3,840 cartons of beef in an 18-hour cycle.

That increased speed and consistency allows the brand to meet the needs of its current customers, as well as look to the future and the possibility of moving into new markets.

Food can go to waste for a variety of reasons, such as if suppliers incorrectly estimate product demand or if there is an issue in a cold storage warehouse that causes the building to remain at an elevated temperature for an extended period that results in spoilage.

Fortunately, robotics can address cold storage challenges including food waste in several ways. For example, a study about cold storage in India found that 30-40% of agricultural products get wasted due to an insufficient number of cold storage facilities. As such, much of the fresh produce output in India spoils because there are not enough places to store it.

The research about that matter acknowledged that solving the problem requires tackling it from several directions and that there is no single solution to take care of the issue. But, companies in other areas of the world have maximized their cold storage spaces with help from robots. Perhaps a similar strategy would work in India.

In one instance of a technology used in the warehouse, a robotic crane lifts pallets five racks high and utilizes more space for pallets than humans would when operating forklifts. If cold storage facilities in India did something similar, they could fit more perishable inventory in each warehouse, thereby reducing the amount that goes to waste.

Companies that deal in the cold storage sector have to figure out how to keep energy usage at a reasonable level. That’s a task made more straightforward with robotics. For example, the ASRS mentioned above save upwards of 30-50% in energy due to the way those technologies keep more cold merchandise in smaller spaces.

There’s another benefit, too, since facilities using ASRS typically have smaller roof areas than non-automated warehouses. Sources say it costs more to keep warehouses cooled than heated, and most energy loss occurs from the roof. A smaller roof means less energy lost.

Additionally, because robotic equipment reduces the need for human employees in many cases, energy savings could happen elsewhere, such as reduced dependence on bright lights or incidences of doors opening and as people walk in and out of cold storage rooms.

Automation can also alert cold storage warehouse managers to potential problems causing excessive energy usage. Then, they can intervene before a utility bill becomes too high.

The cold storage industry contends with many challenges. As this list shows, applying robotics in strategic ways could help companies conquer them. Then, they’re well-equipped to meet internal needs and customer expectations.