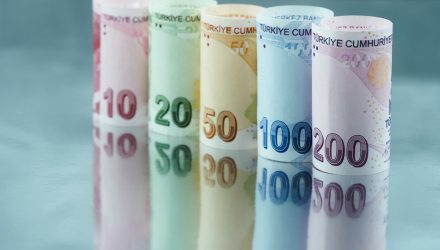 The Turkey ETF Is on a Wild Ride

The Turkey country-specific exchange traded fund dipped after President Recep Tayyip Erdogan proposed a rescue plan to protect the local currency by encouraging Turkish citizens to put their money back into the lira.

In a speech late Monday, Erdogan stated that the government will guarantee returns on lira deposits at a rate similar to those on foreign currency, helping to support the lira currency from any further depreciation, the Wall Street Journal reports.

“We are offering our citizens, who want to eliminate their concerns arising from the increase in currency rates while making use of their savings, a new financial alternative,” Erdogan said.

The move helped the lira jump as much as 18% against the U.S. dollar on Tuesday, a surprising move in the foreign exchange markets where most moves are less than a percentage point per day. The sudden appreciation also only partially offset the plunge in the currency, which has depreciated close to half its value this year.

The new savings measure is a special “currency rate protected” account with a minimum of three months, according to the finance ministry. The government will compensate any depreciation in the lira from when the account is open to when it is closed.

However, some economists and investors warned that the plan was a risky way to stabilize the currency since it will use government funds to push investors toward the lira. Some are concerned that the new measure will require heavy government borrowing or more money printing.

“It is the end of a series of ad hoc maneuvers,” Alp Erinc Yeldan, an economist at Istanbul’s Kadir Has University, told the WSJ. “It does more harm than good. It’s a huge income transfer to the banking sector, all of which could have been handled by increasing interest rates.”

Reflecting the market’s perceived concerns over the new strategy, Turkey’s equity market resumed its decline after news of the government’s plans, which even triggered two circuit breaker halts during trading.