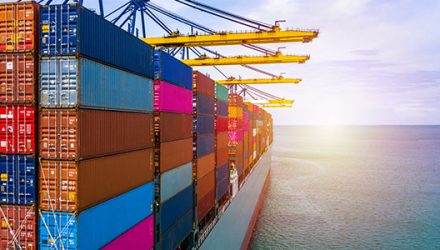 Malcolm McLean may be the most important person you’ve never heard of. His claim to fame? Inventing a box.

But not just any box. McLean—a high school-educated truck driver from North Carolina—came up with the idea of creating a series of standardized, intermodal steel containers that could neatly be stacked on ships as well as trains and trucks.

That was in 1937. It would be another two decades before the first container ship voyage occurred, from Newark to Houston. Ten years after that, in 1966, container shipping expanded to international routes.
Everything changed, though, with the Vietnam War, which created the sudden need for mass volumes of supplies to be transported quickly and efficiently. The shipping container’s time had come. By the end of the 1960s, McLean sold his empire for a profit of $160 million.

According to one estimate, McLean’s invention reduced the cost of shipping by 25%. I would argue the savings are many times greater than that, perhaps incalculably so.

Just consider labor alone. Before containerization, goods had to be loaded and reloaded by hand at every stop along the supply chain—from ship to port, from port to train, from train to truck. Today, much of this work is seamless and automated.

Below is an excerpt from economist Marc Levinson’s essential history on the container and its impact on our lives, The Box: How the Shipping Container Made the World Smaller and the World Economy Bigger:

“An enormous containership can be loaded with a minute fraction of the labor and time required to handle a small conventional ship half a century ago. A few crew members can manage an oceangoing vessel longer than four football fields. A trucker can deposit a trailer at a customer’s loading dock, hook up another trailer, and drive on immediately, rather than watch his expensive rig stand idle while the contents are removed. All of those changes are consequences of the container revolution.”

Indeed, few inventions of the past 100 years have touched so many lives as the container. Anyone who makes a purchase on Amazon or steps inside a Costco or other big-box retailer is benefiting directly from McLean’s idea. Anyone who participates at all in the global supply chain—whether they be farmers, fabricators, assemblers or craftsmen—owes a huge debt of gratitude to the container and its ability to facilitate global trade with dependability and at relative low cost.

(However, shipping rates, for sea as well as air freight, have soared to new all-time highs since the start of the pandemic. More on that later.) Between 80% and 90% of global trade is today conducted by sea, with around 60% of that done by maritime container fleets. In 2019, a stunning $14 trillion of all goods worldwide spent some of their time inside the box that was conceived of by a North Carolina truck driver in the 1930s.

The very biggest container ships now can carry approximately 24,000 20-foot containers—compared to only 58 on McLean’s first Newark-to-Houston voyage. (For context, a single 20-footer can carry 18,000 iPads.) The Ever Given, the massive ship that ran aground last year in the Suez Canal, has a carrying capacity of 20,124 20-foot equivalent units (TEUs).

As you know, shipping rates have surged to all-time highs since the start of the pandemic as households shifted much of their spending from services to goods. Although these sky-high rates have retreated somewhat, shipping companies are well-positioned to maintain high levels of revenue through capacity growth discipline.

Take a look below. Since at least 1996, global shipping companies have grown the size of their fleets each consecutive year to meet demand, but in the past decade, the rate of expansion has been much lower than in previous years. There are other ways companies rebalance supply and demand in their favor. One of them is idling, which Bank of America describes as “a relief valve for the industry in order to deal with temporary overcapacity.” Then there’s vessel speed. In recent years, container ships have slowed down, due largely to megaships that have been designed for slower, more fuel-efficient sailing.

And finally, there are scrappings and demolitions. According to BofA, aging vessels become more expensive to maintain and generally have less competitive fuel consumption than newer ships. Scrapping typically slows down, though, during boom periods such as before the financial crisis and in the months since the pandemic began.

Remember I said McLean sold his company in 1969? The name of that company was SeaLand, which, through a series of subsequent sales and acquisitions, ended up as part of the super-massive Danish shipping conglomerate A.P. Moller-Maersk, today one of the largest companies on the planet with a market cap of about $70 billion.

In its fourth-quarter financial results, released Friday, Maersk said it generated an incredible $18.5 billion in revenue and earnings before interest, tax, depreciation and amortization (EBITDA) of $8 billion, well above the company’s guidance.

Back in October, Bloomberg analysts estimated that Maersk’s 2021 profits would total $16.2 billion, which would be a record not just for Maersk but any Danish company. We’ll see how accurate this estimate was next month when the company releases its annual report.

In any case, my reason for bringing this up is because Maersk has for decades been the largest shipping company by carrying capacity—until recently. Switzerland-based company MSC finally dethroned Maersk recently after it took delivery of several second-hand ships, according to S&P Global. MSC now operates 4.284 million TEUs, compared to Maersk’s 4.282 TEUs. Speaking of earnings, Delta Air Lines reported for the fourth quarter and for 2021 last week, and results, while certainly not at pre-pandemic levels, were nevertheless much better than expected. Shares of the Atlanta-based company, which is also involved in the air cargo business as Delta Cargo, finished Thursday’s session up 2.12%.

Delta reported sales of $9.47 billion during the quarter, beating expectations for $9.21 billion. For the full year, it reported $280 million in profit, compared to a loss of $12.4 billion for the previous year.

Furthermore, the carrier believes it has a strong 2022 ahead of it. CEO Bastian says that even though omicron continues to disrupt commercial air travel, he is “confident in a strong spring and summer travel season with significant pent-up demand for consumer and business travel.” Wheels up!

Find out why we’re bullish on global cargo and shipping names by clicking here!

Holdings may change daily. Holdings are reported as of the most recent quarter-end. The following securities mentioned in the article were held by one or more accounts managed by U.S. Global Investors as of (12/31/2021): Amazon.com Inc., Costco Wholesale Corp., AP Moller-Maersk A/S, COSCO SHIPPING Holdings Co. Ltd., Delta Air Lines Inc.
EBITDA, or earnings before interest, taxes, depreciation, and amortization, is a measure of a company’s overall financial performance and is used as an alternative to net income in some circumstances.