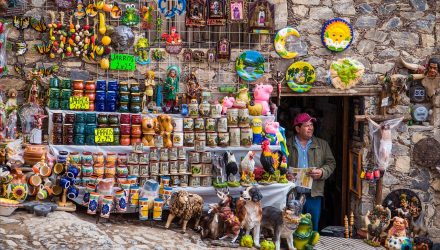 Even amid fears surrounding the North American Free Trade Agreement (NAFTA), the iShares MSCI Mexico Capped ETF (NYSEArca: EWW), the largest ETF dedicated to Mexican equities, is up about 3% this year.

Still, some tests linger for Latin America’s second-largest economy. Speculation is swirling about the U.S. and its place in NAFTA with some market observers assessing the possibility of the U.S. withdrawing from the free trade accord. That move is potentially devastating for Mexico’s economy.

“Mexican macroeconomic and fiscal data from 4Q17 were in line with Fitch’s expectations for a continuation of moderate growth and improvements in fiscal and external accounts,” said Fitch Ratings. “Growth reaccelerated after falling below 2.0% in 3Q17, helped by higher oil prices, strong manufacturing exports and recovery from earthquakes. Similarly, external accounts displayed resilience, with exports growing by 9.5% and the non-oil trade balance recording a surplus.”

“While Mexico’s growth trend should remain stable in 2018, challenges preventing a significant acceleration in GDP growth will remain,” said Fitch. “The uplift from falling inflation and robust external, primarily US, demand is countered by subdued investment amid ongoing concerns about the future of NAFTA and the 2018 elections along with ever tighter monetary policy. The Central Bank raised its policy rate by another 25bps to 7.5% during its February 2018 meeting. This should keep 2018 growth broadly in line with the 2017 outturn, in our view.”