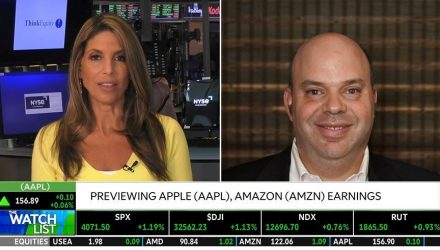 There’s just no getting away from the biggest growth companies of the last decade; almost every portfolio, whether it’s a 401(k), an IRA, or any other, will have exposures to companies such as Apple (AAPL) and Amazon (AMZN). Todd Rosenbluth, head of research at VettaFi, was recently on TD Ameritrade to discuss how Apple and Amazon’s earnings would impact ETFs with host Nicole Petallides.

Both companies can be found within large-cap growth-oriented ETFs such as the Invesco QQQ Trust (QQQ) and the Vanguard Growth ETF (VUG), but there are notable differences between the two giants.

Amazon often gets lumped into the broad basket of technology companies, but it is technically classified as part of the consumer discretionary sector according to the Global Industry Classification Standard (GICS), a standard that S&P and MSCI both utilize. As such, the Consumer Discretionary Select Sector SPDR Fund (XLY) carries Amazon but not Apple, while the Technology Select Sector SPDR Fund (XLK) does the opposite.

How will this afternoon’s $AAPL & $AMZN results impact the ETF space? 🤔

Apple can be found in many environmental, social, and governance (ESG) funds. It also pays dividends and therefore is carried in dividend strategy funds such as the WisdomTree US Quality Dividend Growth ETF (DGRW).

“Apple has continued to raise its dividends year after year; it’s continued to be able to offer returns to shareholders, and that adds to its appeal,” Rosenbluth said.

For investors who are interested in exposure to both companies but don’t want to approach investing through a growth-oriented lens, particularly in a time of rising interest rates, the Roundhill Ball Metaverse ETF (METV) offers a thematic approach. Within METV, Apple is carried at a larger weight than Meta (formerly Facebook).

“If you own a thematic-oriented ETF, you’re likely to have exposure to two of these heavyweight giants within the growth sector, one technology and one consumer discretionary,” explained Rosenbluth. “Again, it just shows the importance of looking inside an ETF, not just judging it by its name but judging it by its underlying holdings.”