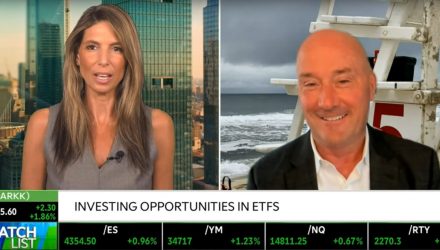 ETF Trends CEO Tom Lydon had plenty to share on the TD Ameritrade Network with host Nicole Petallides when asked about the ARK Innovation ETF (ARKK).

As Lydon explains, many thought that tech was losing its luster earlier in the year. However, the 10-year Treasury rate recently dipped back below 1.3%, which was great for growth stocks. On top of that, the recent executive order issued by President Biden was a terrific move for innovative technology.

Lydon adds: “When you look for companies that might be the next FAANG stocks, there are some thematic ETFs out there, right across the board, that are very innovative and now, with the government getting behind innovation, competition, technology, and growth, I think we’re going to see more and more money flowing into these thematic strategies, which not only do Cathie Wood and her team at ARK have, but are right across the board as a whole.”

It’s also important to note that the ETF market will hit over $1 trillion in new assets this year. “Fixed income was the big focus last year,” Lydon continues. “This year, it is about equity.”

Three big themes for Lydon are the low cost, the diversification, and the tax efficiency of ETFs. There’s still more money in mutual funds today. However, there’s also $5 trillion in money market funds. Eventually, that will find somewhere to go, and that’s unlikely in the bond market due to rising interest rates.

“What I think we’re going to see is the dominance of the S&P 500 start to wane as these large cap stocks have a huge weighting in the S&P. Plus, the government that has been targeting these big companies from a monopoly standpoint – it’s important to know there’s competition in the U.S., but also China. One thing President Biden said in his infrastructure bill is that we have to find ways to compete overseas.”

With inflation being a major concern for advisors, it doesn’t matter what the messaging is from the Fed: investors need to be steered in the right direction. Inflation can be toxic for portfolios.

“It’s important to invest in areas like agriculture, energy, and metals. Unfortunately, gold has been the worst-performing commodity in the past year,” Lydon adds.

With that in mind, there are several ETFs to consider in this space, including the Invesco DB Optimum Yield Diversified Commodity Strategy No K-1 ETF (PDBC). Plus, as gold tends to be a second-half player, the SPDR Gold Shares ETF (GLD), the largest gold ETF in existence, may still be a good place to look. Despite the precious metal headwinds, GLD has still made $8 billion so far this year.