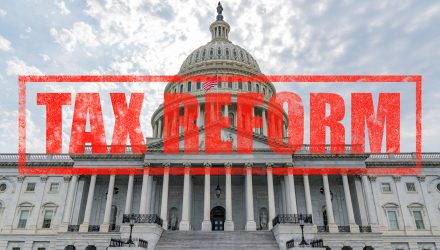 Multi-national technology firms have largely stashed away the record overseas profits to avoid the U.S. tax rate, but the companies could soon repatriate their cash hoards and dish out dividends or add share buybacks, potentially strengthening tech-related ETFs.

The U.S. Senate has proposed a tax bill to help American companies become more competitive, cutting the corporate tax rate from 35% to 20%, allowing businesses to fully deduct business expenses, giving a 23% deduction for pass-through businesses and reducing the tax rate for historical untaxed foreign earnings from 35% to 14.5% for cash and 7.5% for non-cash assets, reports Carmine DiCesare for Factset. The tax rate for untaxed foreign earnings would be drastically reduced from its current 35% U.S. rate.

For clues on what companies would do if they repatriated the trillions of dollars back onto U.S. soil, DiCesare argued that we should look back to 2004 for any hints since the 2004 tax holiday also allowed multi-nationals to repatriate earnings held overseas at a 5.25% tax rate.