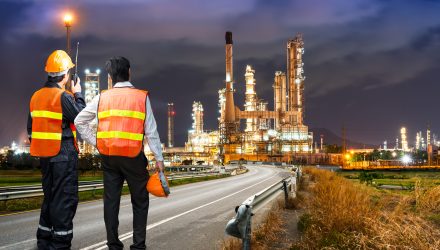 Tax Benefits for the Refiners ETF

The VanEck Vectors Oil Refiners ETF (NYSEArca: CRAK), the only exchange traded fund dedicated to oil refiners, is one of the best-performing energy ETFs over the past 12 months. Some analysts believe the U.S. tax reform legislation passed late last year will provided added benefits to refiners.

CRAK, which is two and a half years old, tracks the MVIS Global Oil Refiners Index, “which is a rules-based, modified capitalization weighted index intended to give investors a means of tracking the overall performance of companies involved in crude oil refining which may include: gasoline, diesel, jet fuel, fuel oil, naphtha, and other petrochemicals,” according to VanEck.

“The Tax Cuts and Jobs Act of 2017 is expected to be positive for most energy companies by lowering the future baseline statutory tax rate and thereby boosting reported earnings,” said Fitch Ratings. “It also creates one-time earnings impacts from the re-measurement of deferred tax assets and liabilities at the new lower rates.”

While the broader energy sector is widely seen as a beneficiary of tax reform, refiners in particular are expected to benefit from lower taxes.