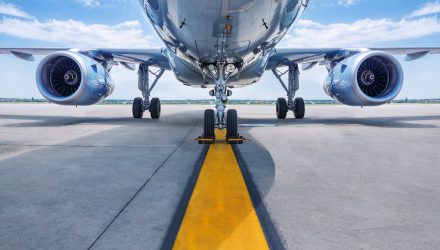 Aerospace and defense ETFs, including the iShares U.S. Aerospace & Defense ETF (BATS: ITA), are being hampered by increasing trade tensions between the U.S. and China with Boeing Co. (NYSE: BA), a major component in aerospace funds, in the crosshairs.

ITA slumped Wednesday “as the industry found itself in the crosshairs of tit-for-tat tariffs between China and the U.S. The fund had added as much as that on March 23 after U.S. President Donald Trump tapped John Bolton, an outspoken Iran hard-liner, as his national security adviser,” reports Bloomberg.

XAR is an equal-weight ETF. PPA holds 50 stocks “involved in the development, manufacturing, operations and support of US defense, homeland security and aerospace operations,” according to PowerShares.

Dow component Boeing was one of the primary drivers of the aersospace industry’s out-performance from the time President Trump won the 2016 presidential election. Now the company is being hampered by tariff talk.

“Much of the slump came from a tumble of more than 4 percent in premarket trading by Boeing Co., which accounts for more than 10 percent of the ETF’s holdings. United Technologies Corp., the fund’s second-largest component and a producer of aircraft engines,” according to Bloomberg.