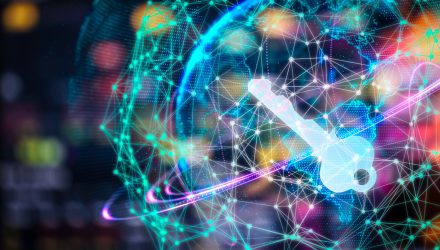 Tap Into Future of Security With This ETF

Growing demand for cybersecurity, cloud computing and other security-related measures are expected to be major sources of technology sector growth in the years ahead. Some exchange traded funds are levered to that trend, including the SPDR Kensho Future Security ETF (NYSEArca: XKFS).

XKFS, which debuted in December, tracks companies involved with innovation behind future security, which includes the areas of cyber security and advanced border security, along with military applications like robotics, drones and drone technologies, space technology, wearable technologies and virtual or augmented reality activities. XKFS may provide a way to invest in those adapting to the future of warfare and national security, such as Aerojet Rocketdyne Holdings, Boeing, Orbital ATK, Mercury Systems and Teledyne Technologies, among others.

Cybersecurity, which XKFS provides exposure to, is widely viewed as a major growth driver. Various data points confirm as much. Hacks, data breaches and other cyber-enabled crimes have increased in frequency, fueling the need to take steeps to protect oneself when using the Internet, according to the FBI.

“Nearly 1,300 data breaches occurred in 2017—a 21% increase from 2016—and more than 174 million confidential records were exposed, according to the Identity Theft Resource Center,” said State Street in a recent note.

XKFS tracks the Kensho Future Security Index. The ETF holds 66 stocks from over a dozen industry groups. Aerospace and defense and software makers combine for over 56% of the fund’s weight. The fast-growing drone market is another theme with exponential that XKFS provides exposure to.