You are at:Home»Equity ETFs»Taiwan: More to Come for This Emerging Market ETF 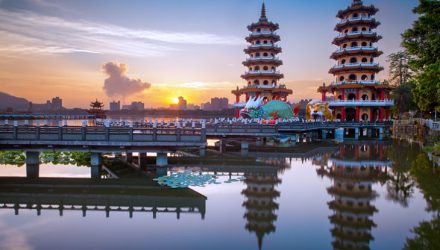 Taiwan: More to Come for This Emerging Market ETF

Among emerging markets, Taiwan is considered lower beta, but that does not mean investors have to sacrifice returns. For example, the iShares MSCI Taiwan ETF (NYSEArca: EWT) is higher by almost 20% year-to-date and some technical analysts believe Taiwanese stocks have the potential to keep rallying.

EWT’s hefty technology sector allocation, which is more than 57.8% of the fund, has become problematic. Moreover, it is the ETF’s arguably excessive weight to one stock, Taiwan Semiconductor (NYSE: TSM), that is creating EWT’s problems. Alone, Taiwan Semiconductor accounts for almost 23% of EWT’s weight.

“In February 1990, the Taiwan Cap Weighted Stock Index (TAIEX) capped off the monster run over the prior decade, closing at a high of 12,424. For the next six months, the index would go on to shed 80% of its value. From that point, the TAIEX would enter a trading range perhaps unprecedented in modern equity markets. For more than 2 ½ decades, the index would trade between roughly 3000 on the low end and 10,200 on the high end. At least a half a dozen times over that period, the TAIEX tested the 10,000-10,200 area, only to be rebuffed. Until this week,” according to ETF Daily News.