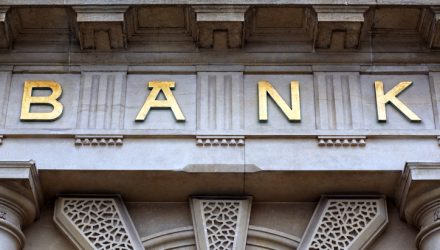 That means the Financial Select Sector SPDR (NYSEArca: XLF), the largest financial services ETF, and rival funds should be spending plenty of time in the spotlight over the next couple of weeks.

“After getting walloped by investors in the last quarter of 2018, financial stocks have generally rebounded in 2019, despite the Federal Reserve’s dovish turn,” reports Ben Walsh for Barron’s.

Rates plunged on a combination of loosening Federal Reserve monetary policy and demand for safe-haven assets over the third quarter. Investors are also betting on further interest rate cuts going forward, and some warn of ongoing risks that could shift sentiment toward safe assets as well.

Banks depend heavily on net interest income or difference between the rates charged on long-term loans and the rates paid out for short-term borrowing. However, the spread diminished as rates on long-term debt plunged toward record lows.