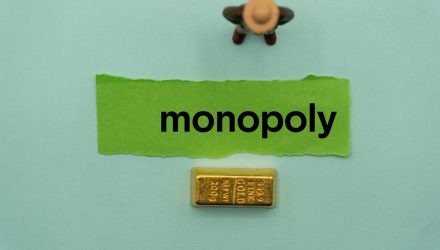 Companies sporting the wide moat designation are defined as those with deep competitive advantages. Whether or not they are monopolies in the traditional sense of the word, that’s up for regulators to decide.

What is clear is that companies with wide moat attributes, including those residing in the VanEck Vectors Morningstar Wide Moat ETF (MOAT), can deliver for investors over the long term. On that note, MOAT is an exchange traded fund to consider because it absolves investors of the stock-picking burden. The $6.1 billion MOAT is home to 48 stocks and follows the Morningstar Wide Moat Focus Index.

Many of MOAT’s holdings have what’s known as efficient scale — an attribute that often lends itself to talking about “natural monopolies.” Still, efficient scale is a trait that can be beneficial to investors over long holding periods.

“When a company serves a market limited in size, new competitors may not have an incentive to enter. Incumbents generate economic profits, but new entrants would cause returns for all players to fall to a level in line with or below the cost of capital,” said VanEck director of product management Brandon Rakszawski of efficient scale.

An element of efficient scale that many investors may not be aware of, particularly with all the talk of big tech monopoly traits, is that this attribute is often found in other sectors that usually aren’t viewed as growth destinations.

“Efficient scale commonly applies to companies involved in telecommunications, utilities, railroads, pipelines, and airports,” added Rakszawski. “For example, while the U.S. does not have publicly traded airports, they are common in other areas of the world. Few cities can support more than one major airport. The financial incentive may not exist to compete with an existing airport because, due to limited demand, reduced market returns may not justify the initial capital necessary to build another airport.”

MOAT currently allocates 16.1% of its weight to industrial stocks — its second-largest sector exposure behind technology. A potential drawback of companies with credible efficient scale is, as noted above, they typically operate in capital-intensive industries. That’s something to be mindful of amid rising interest rates, but there are benefits to consider, too.

“Companies that benefit from this dynamic typically operate in a market that may only support one or a few competitors, which limits competitive pressures. Additionally, for efficient scale markets, market entry often requires very high capital costs, which are not justified by the limited profit potential a new competitor might achieve,” concluded Rakszawski.